Creation of the Painting ‘Red Polder’ 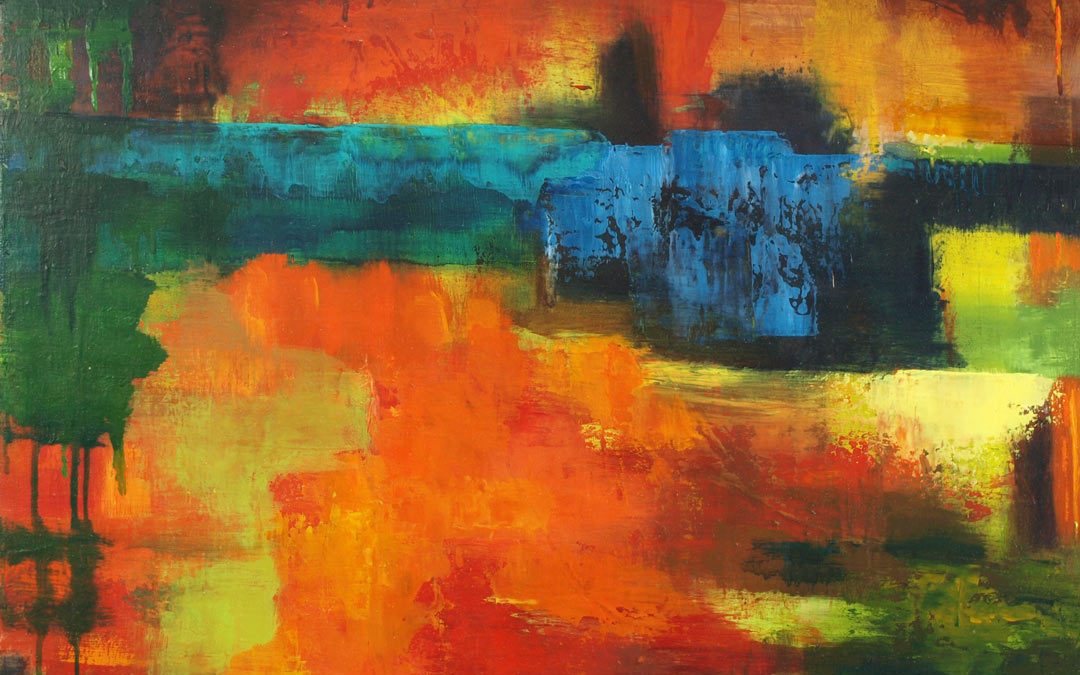 An Introduction to ‘Red Polder’

This is a little story about the creation of the painting B94 ‘Red Polder’ which formed the key painting for my solo exhibition at the Hal Cultuur, Burg, Brugge at the end of September 2017. ‘Red Polder’ is on a 71 x 81 cm linen canvas.

The polders are flat and fertile land inland from the Flemish coast, north of Brugge. The land is protected by sluices from tidal erosion. It is intersected by canals and rivers many of which are lined with avenues of poplars on the dykes. However one views them, whatever the season or light conditions, they invite the creation of a painting.

‘Red Polder’ was the first predominantly abstract work that I have undertaken. Having said that all paintings and drawings are really abstract, they use conventions to represent something on a plane – the surface of the support, be it canvas, board, card etc. What we commonly term abstract painting is intended to express ideas pictorially. In the case of ‘Red Polder’ the ideas were developed during several journeys north from my home city of Brugge – fleeting glimpses, slow journeys, walks and cycle rides in varying conditions.

Painter’s Processes and “States” of an Abstract Painting

Artists are allowed to select a palette of hues rather than attempt to imitate the perceived colours of the scene. In this case my motif is a red-orange and I have worked in harmonics to and complements of that colour.

‘Red Polder’ is painted in 21 “states”, a state being a development in the work which could be considered a stand-alone painting if the artist so decided – in contrast to an under-painting, say, which is generally a broad blocking-in which is recognisable in the final design.

A state, typically painted over two or three days, is painted wet-in-wet; subsequent states commence wet-on-dry. Some states are dominated by the different methods of applying paint (brush, painting knife, squeegee, rags etc) whereas other states are formed using paint that is modified with mediums such as neo-Megilp or wax, some are predominantly opaque and some translucent. Many of the states are virtually obliterated as the painting progresses but some vestiges remain. Nonetheless each state plays a significant role in arriving at the planned finished work.

Oil painting makes extensive use of the properties of the pigments- their opacity or translucency. If you think of a typical Rembrandt portrait he achieves much of the visual impact by using predominantly translucent layers for the under-painting, increases the opacity as he works up, and then confronts us with significant opaque paint to contour the creases in the brow or the rosy cheeks of a young girl. What attracts us is the orchestration of the layers one with another and his wonderful edge control. As a final flourish he lays a translucent wash over the impasto so it flows into the crevices – and then wipes off the surface so you see traces of pink, say, within the wrinkles. Magic. In ‘Red Polder’ I have adopted some of that methodology to enliven the layers and, hopefully, create interest for the viewer.

States 1 to 4: The Foundation of ‘Red Polder’

The skeleton of the design has been worked predominantly in translucent, mid value paint to create the foundation for the whole painting. The intensity of state 2 is then suppressed in state 3. The cloudy effect in state 4A is achieved with white paint with wax medium and this has then been cut into in state 4B. This provides the basis for the textural effects within the subsequent paint layers. This is particularly important in a painting where the paint is predominantly applied with a squeegee or painting knife which touches the raised surfaces and leaves less paint on the “hollows”. 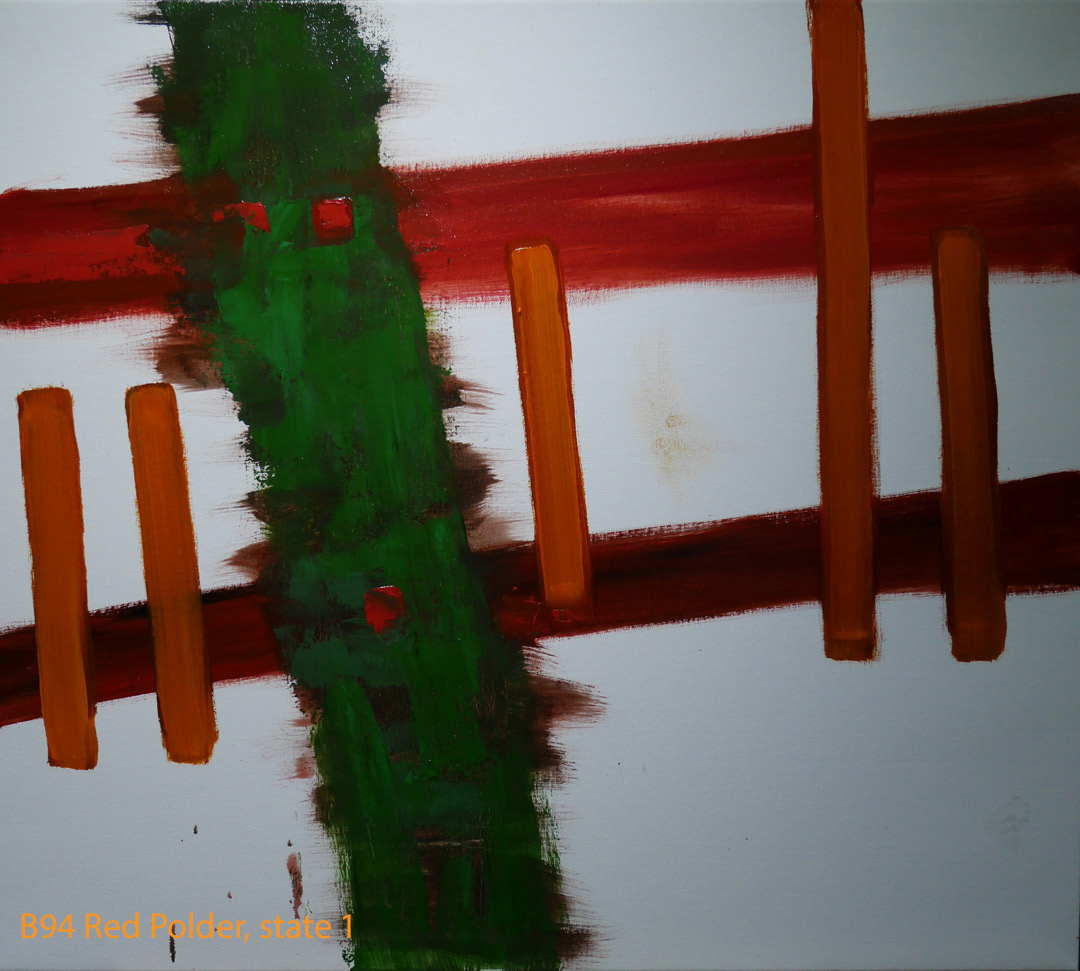 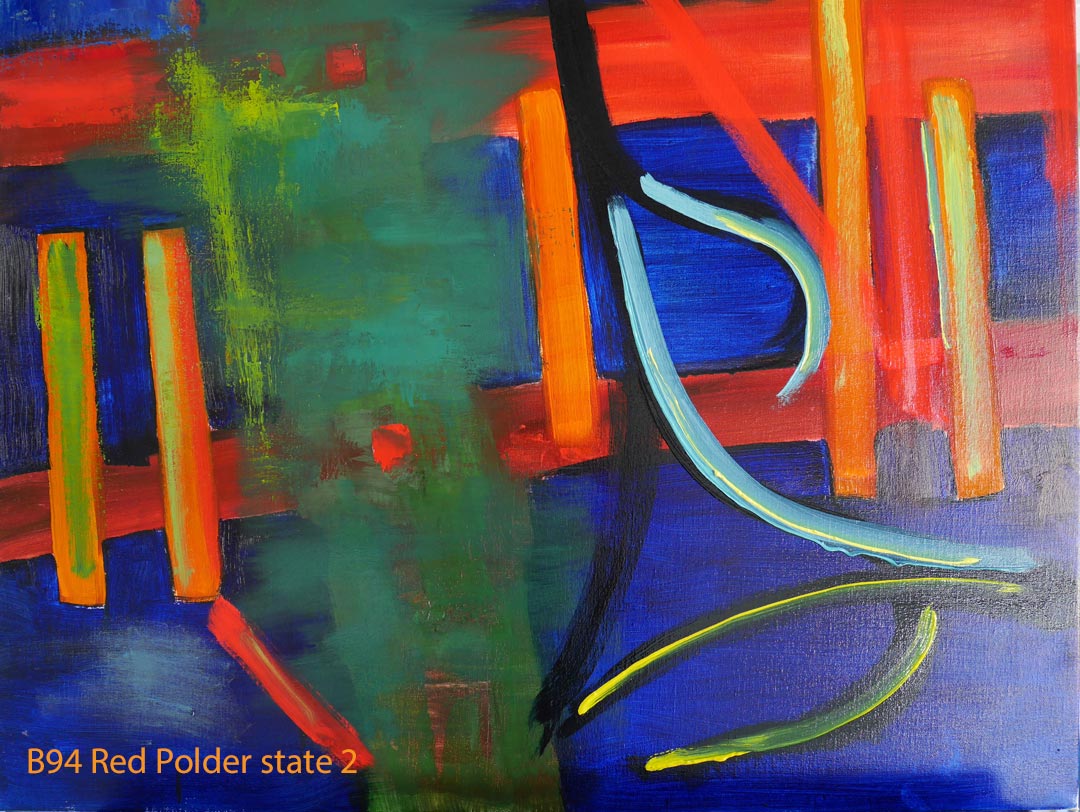 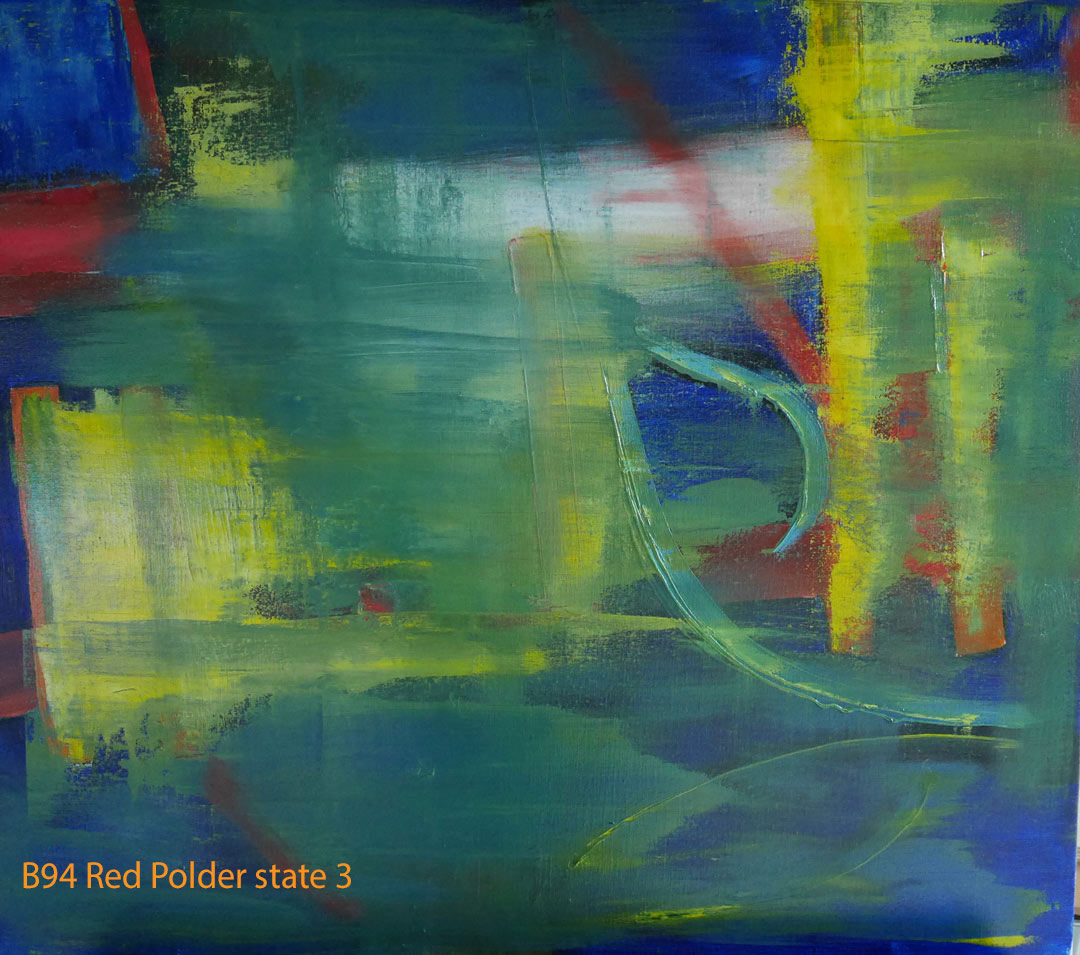 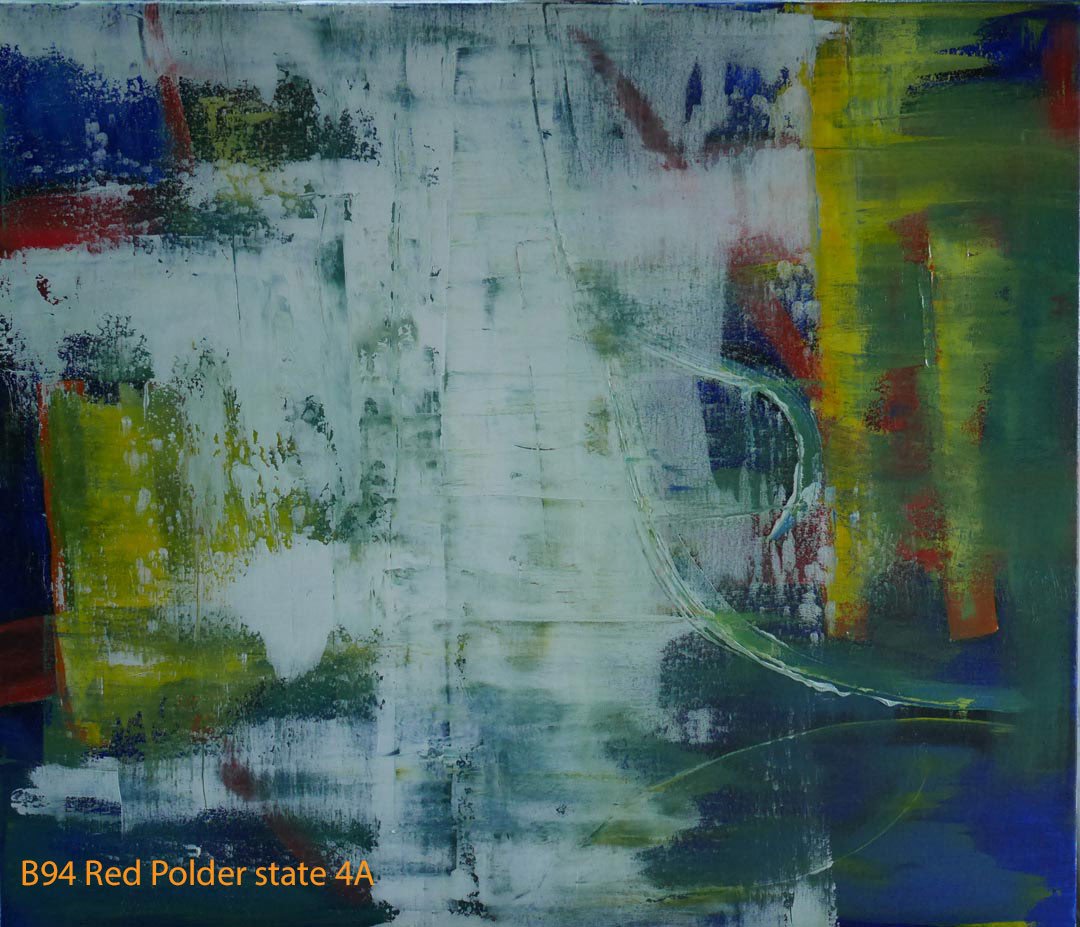 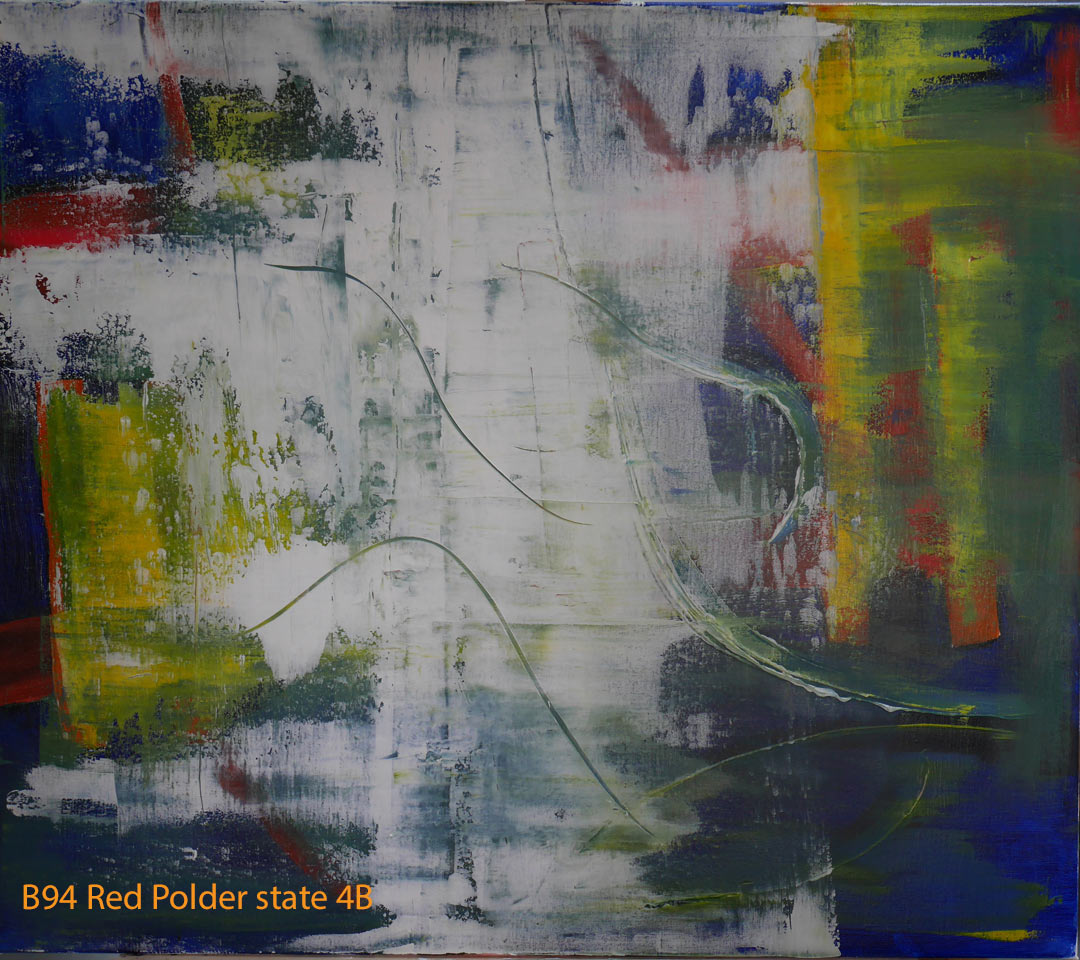 States 5 to 8: Artist’s Intent Influenced by the Random Application Method

States 5 through to 8 build upon the foundation of state 4B; some features of 4B are suppressed and some enhanced or emphasised as I worked towards the final design.

State 5 uses intense yellow to form a base for the subsequent red. Vestiges of this remain visible in the finished painting. State 6A introduces the green (complement to the red) which is overlain with a semi-translucent layer of white and red in state 6B.

States 7 and 8 are then used to develop the dark area centre right to couch the subsequent dominant red-orange and introduce some of the shapes and boundaries. 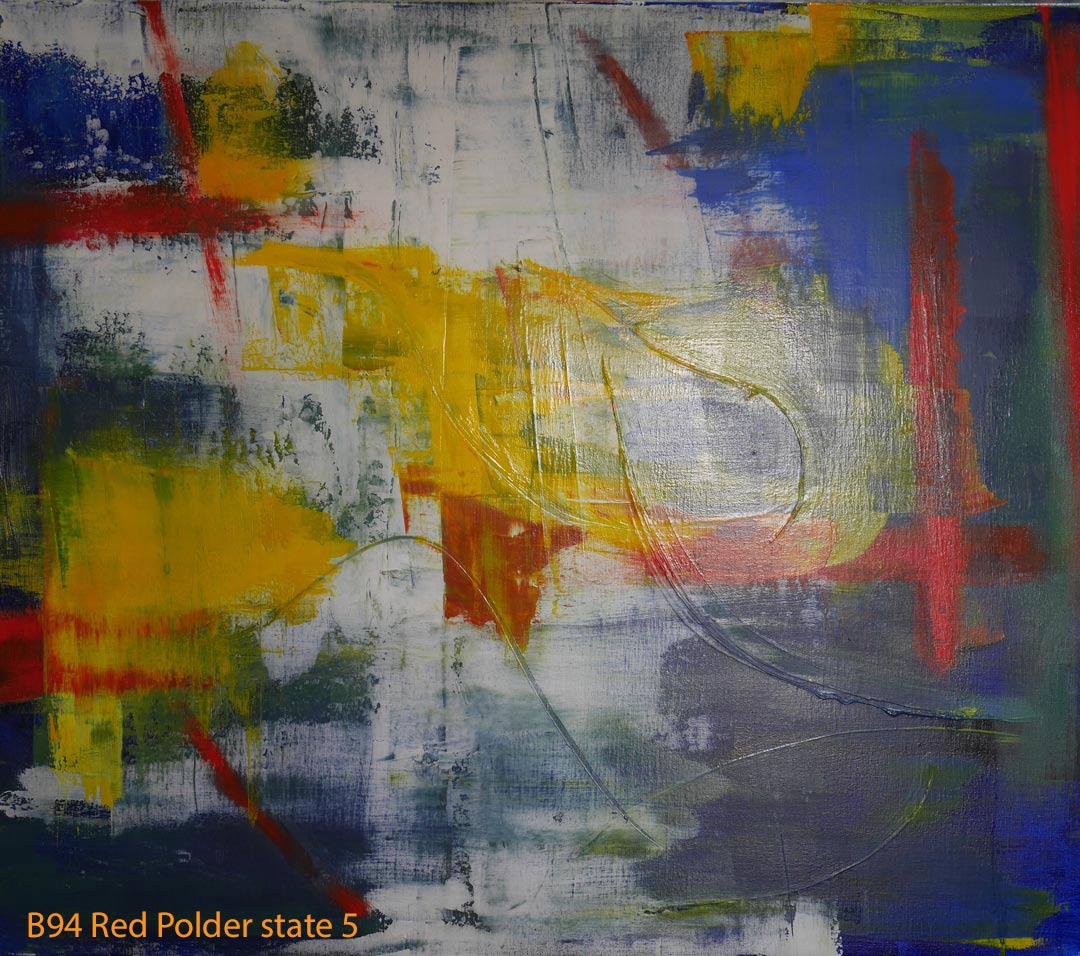 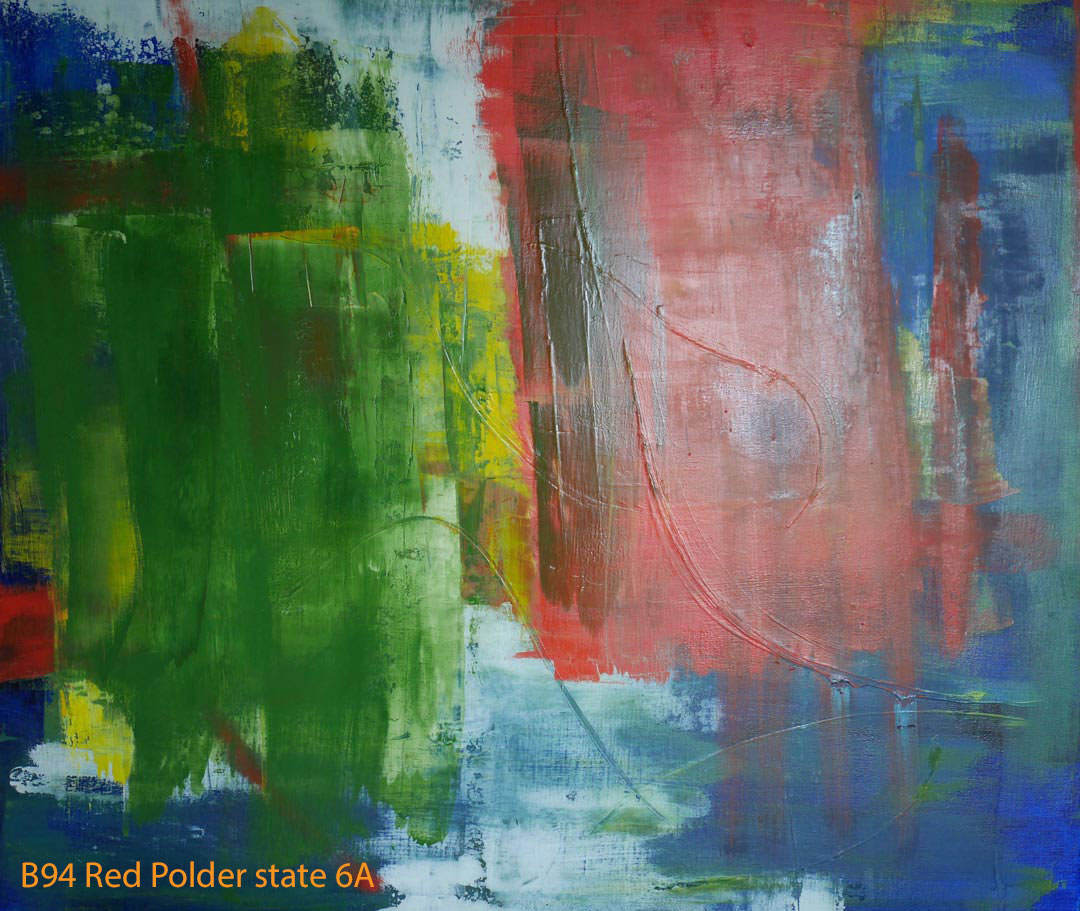 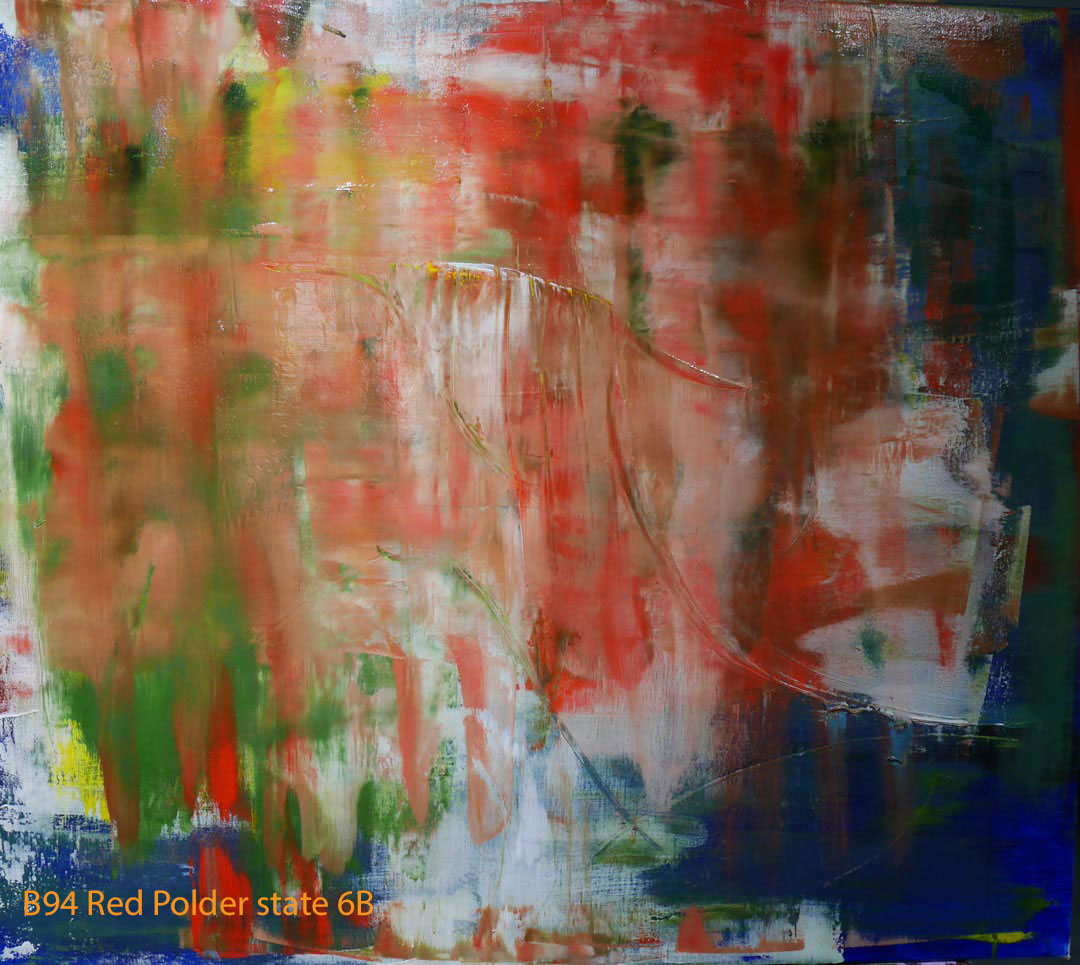 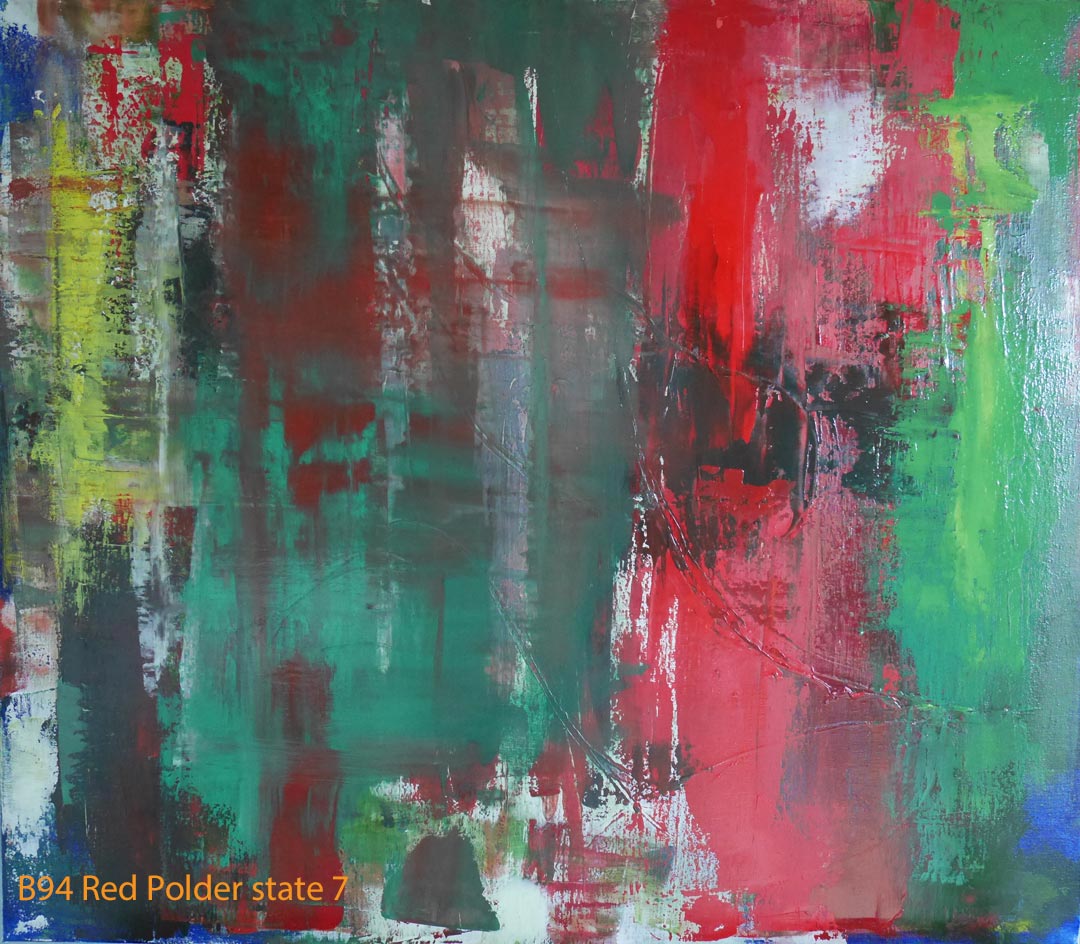 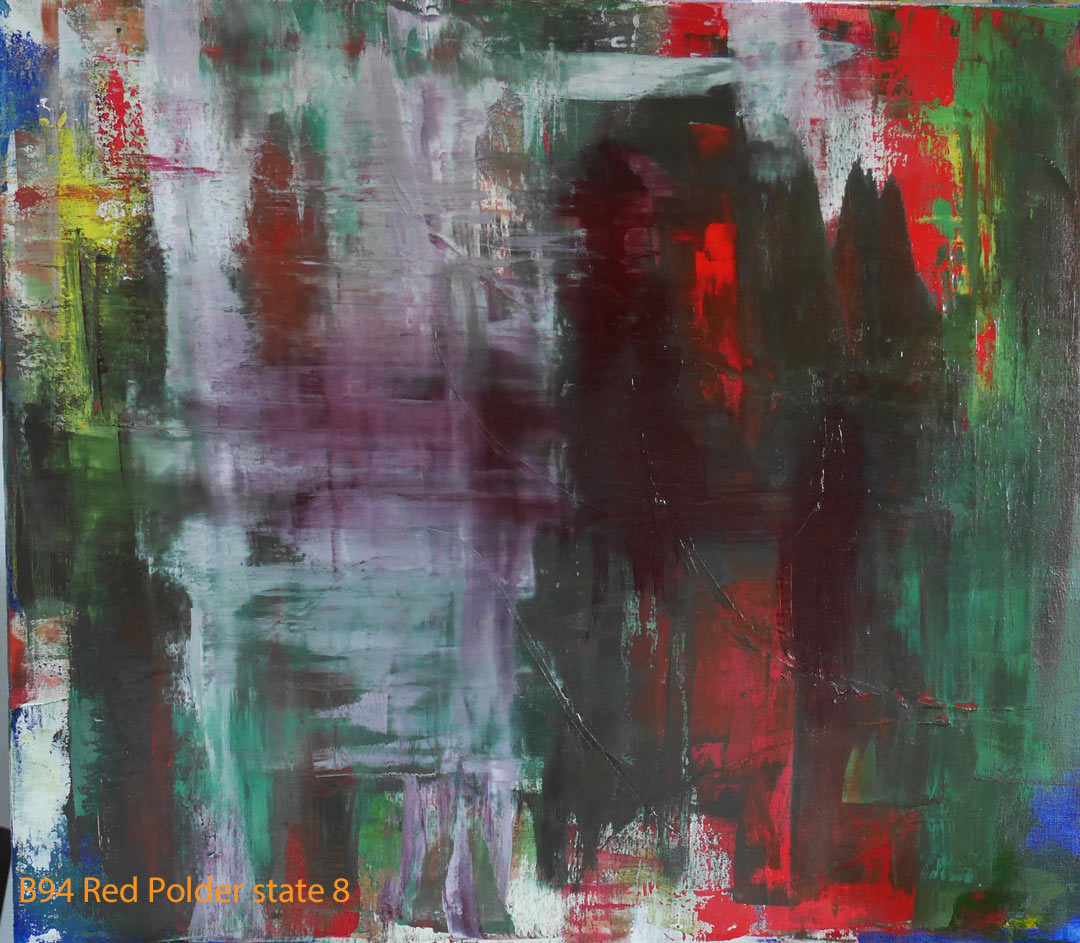 States 9 to 12 are about identifying passages I want to retain, those I want to retain and develop, and those that do not accord with the design and are therefore suppressed or eliminated. I have extended the textural range and this can be seen clearly where subsequent layers of paint skip over the surface or settle into the depressions with the passage of the knife or squeegee. With state 12 there exists a significant amount of what features in the final painting. 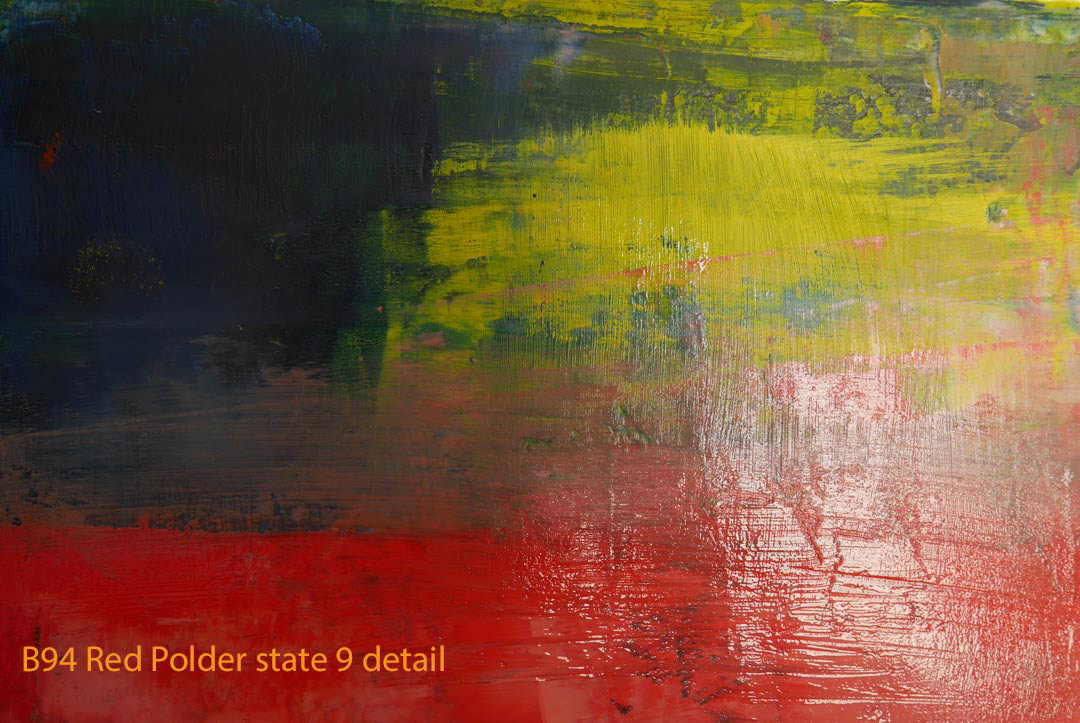 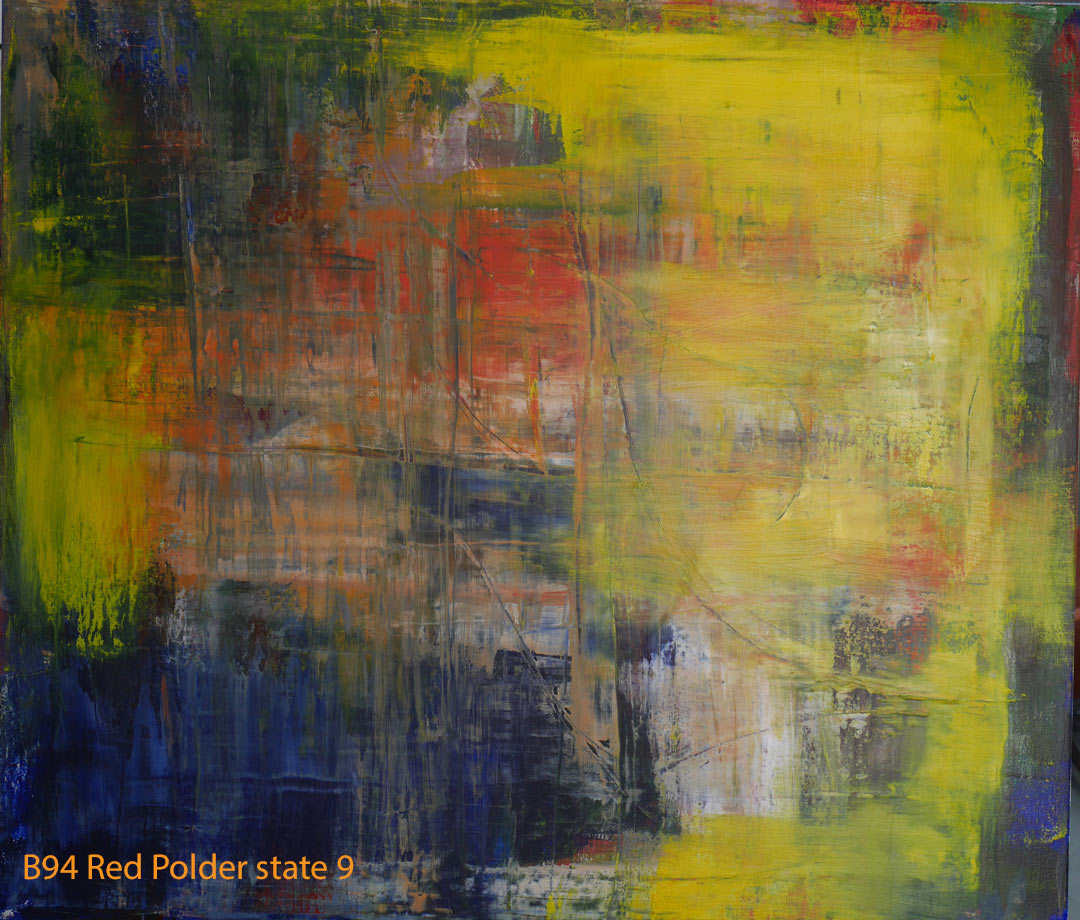 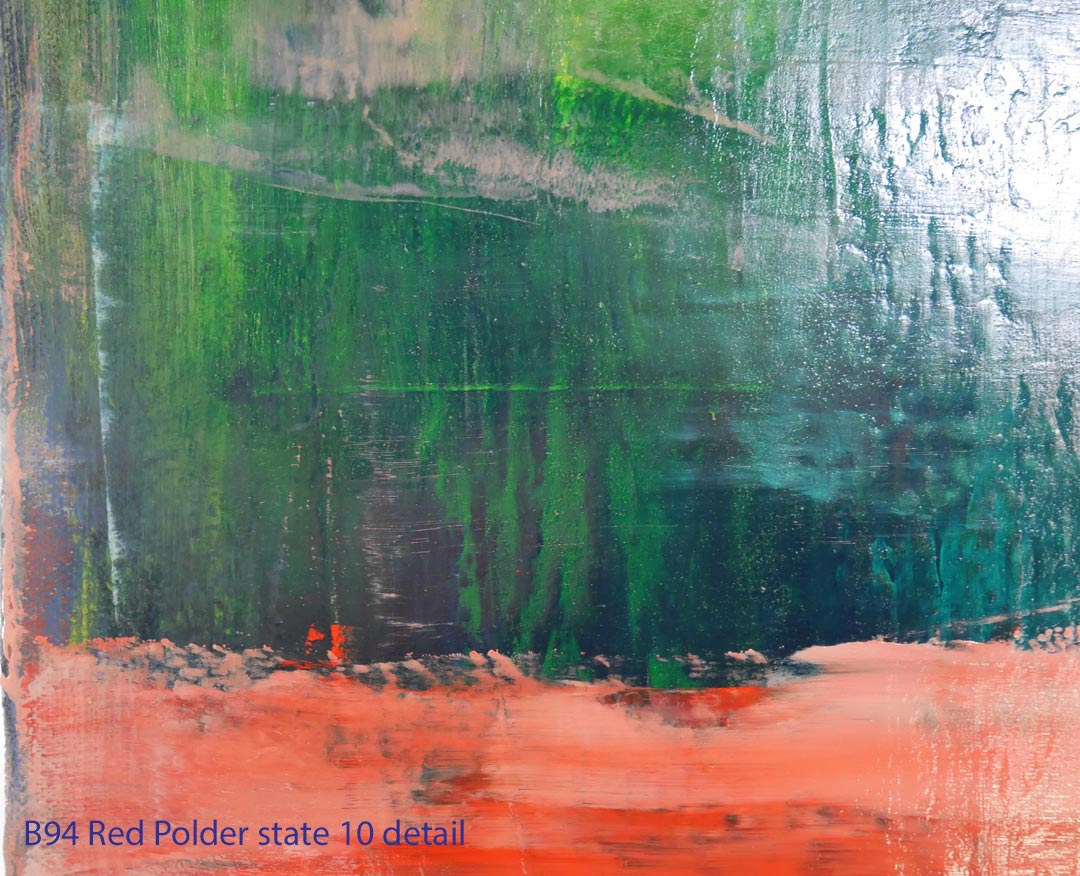 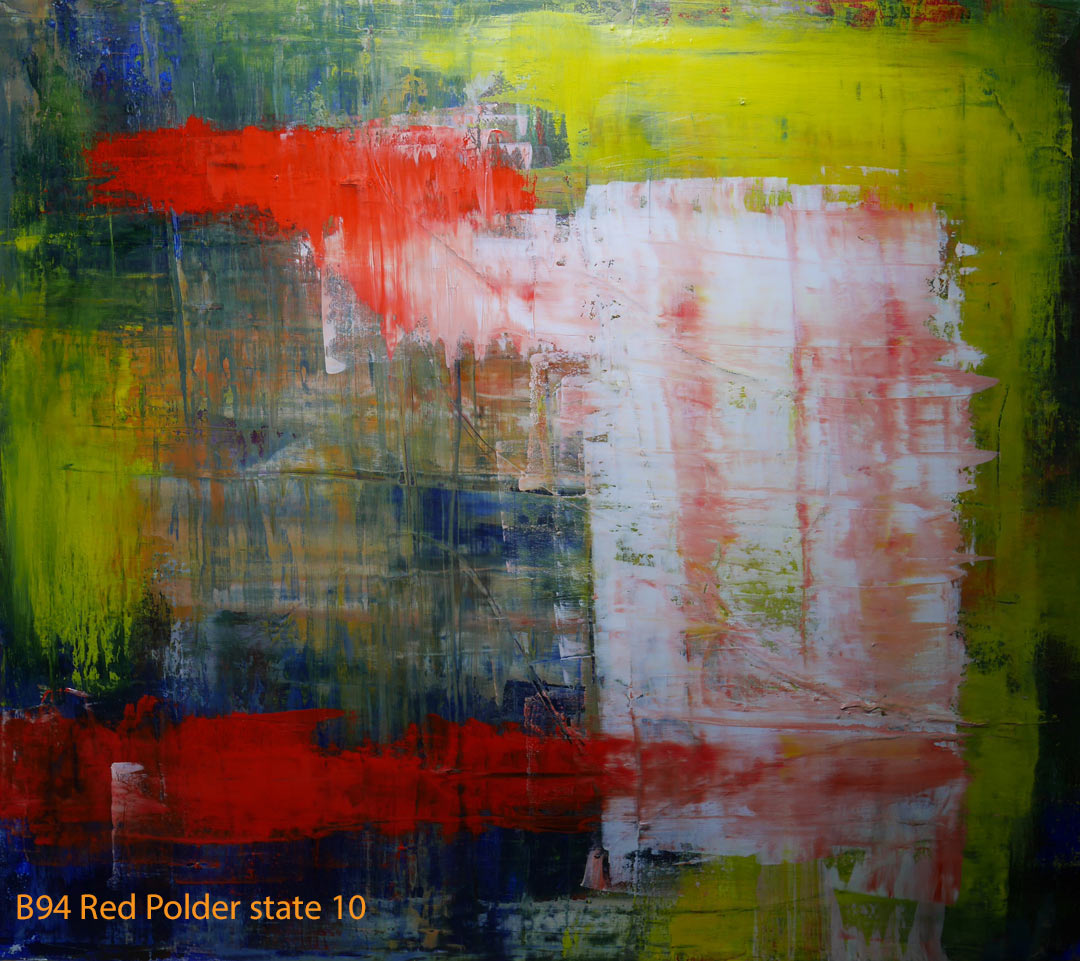 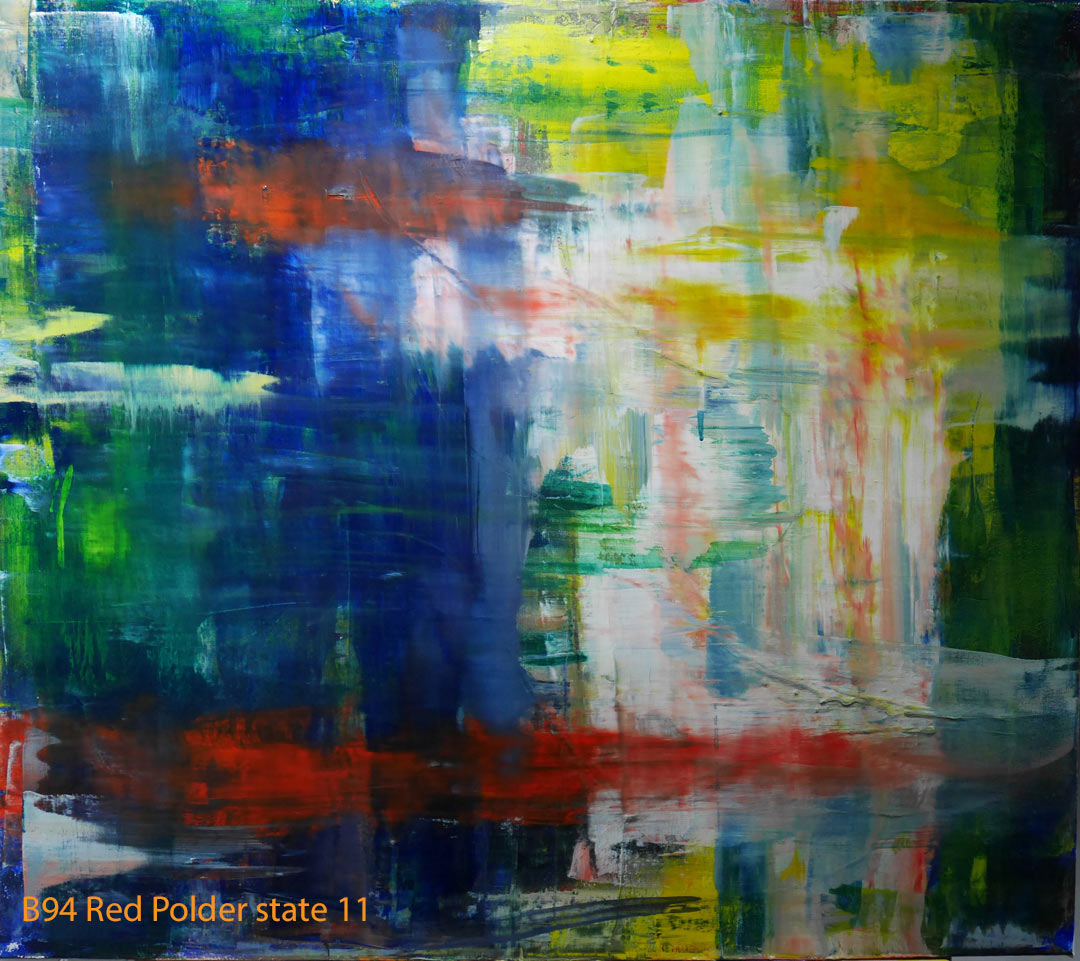 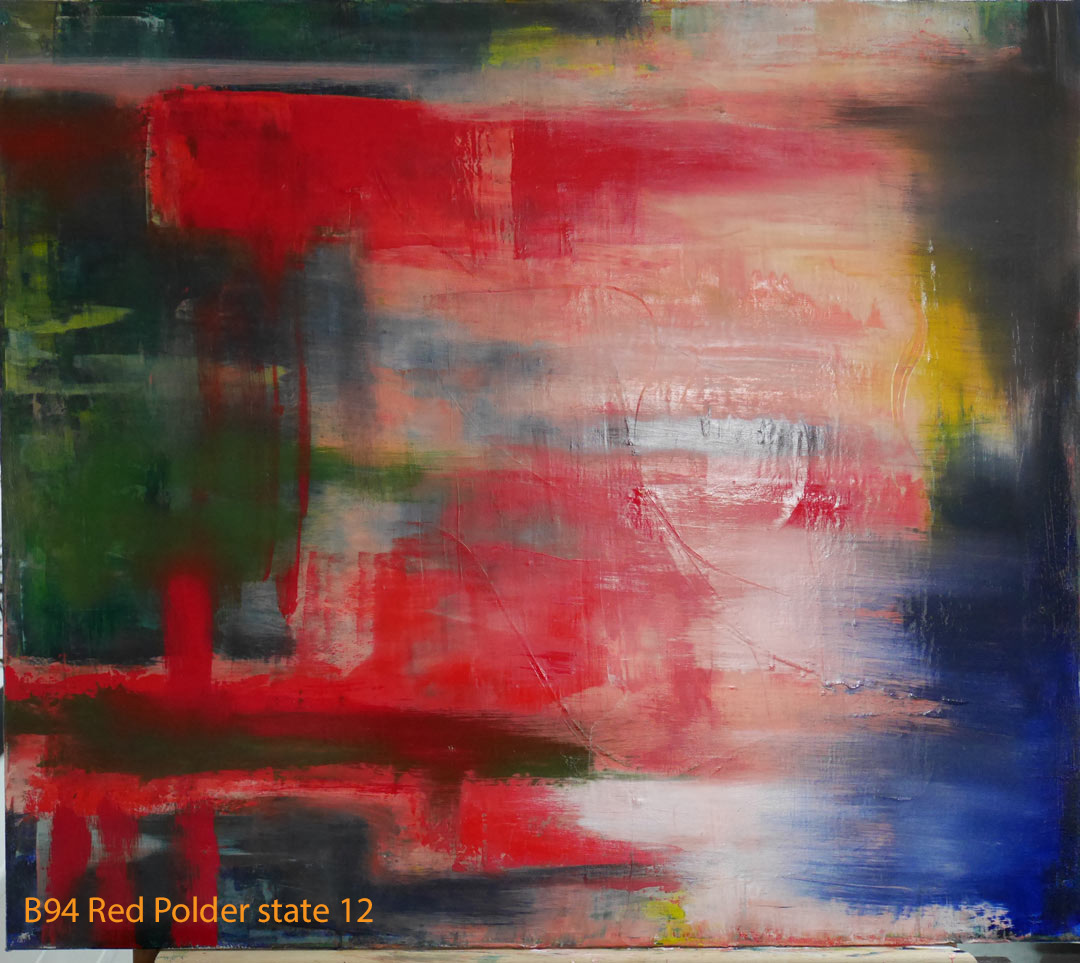 Texture dominates these states and the scale of paint application is reduced although generally large applicators are still used to prevent the composition becoming stiff.

I have no record photograph of state 14 unfortunately because it was a significant step. 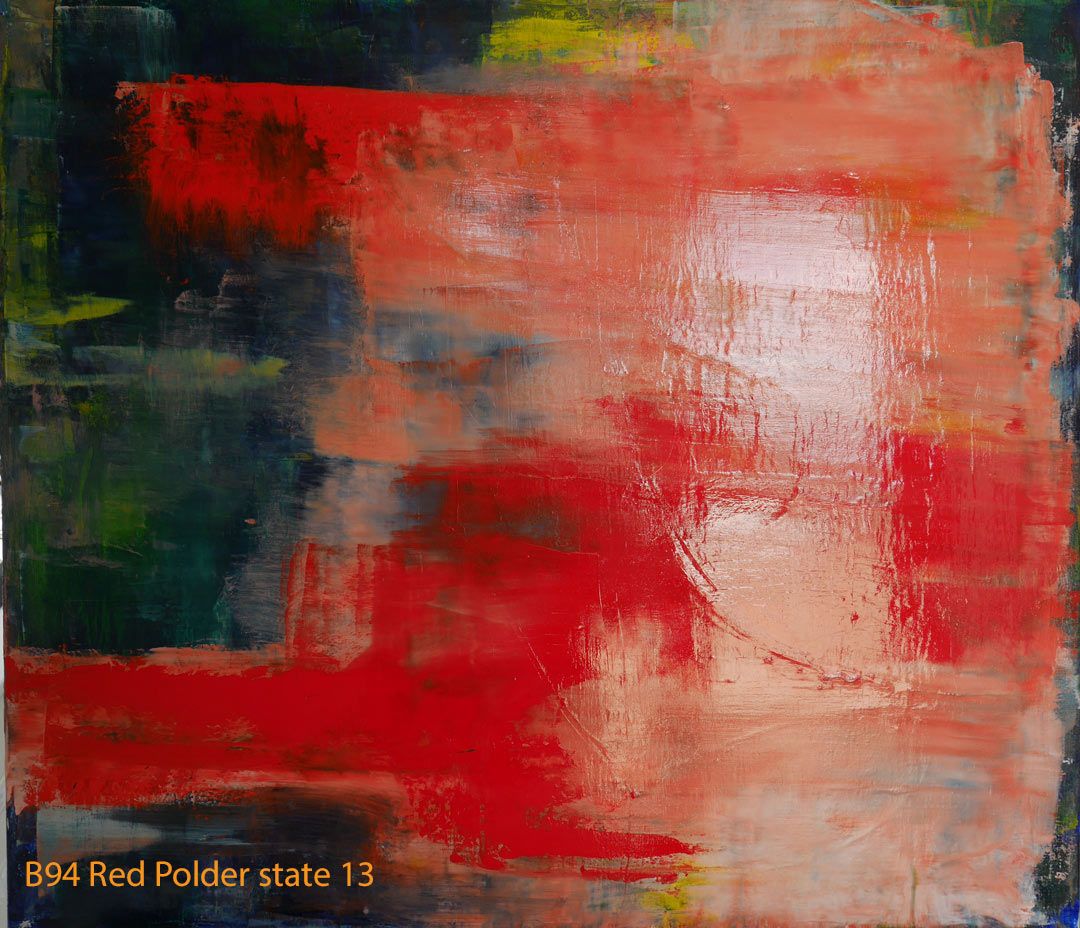 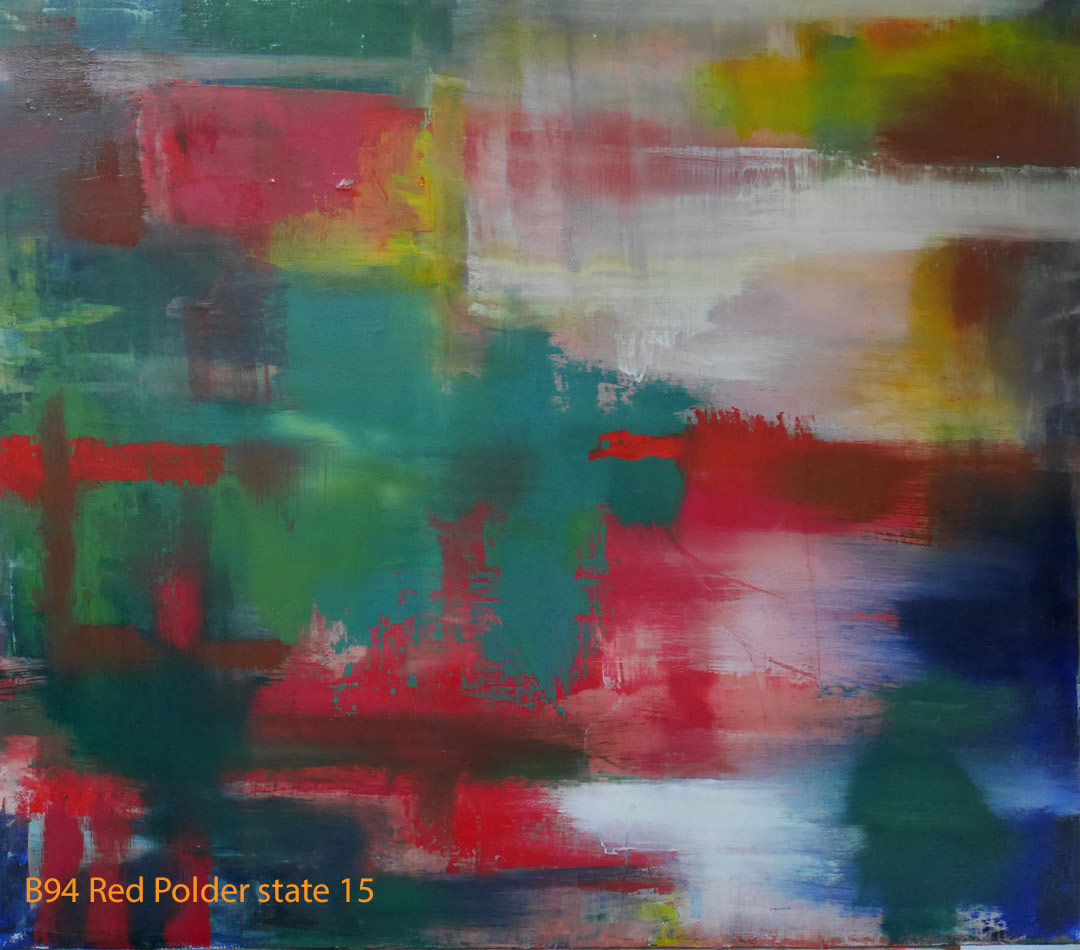 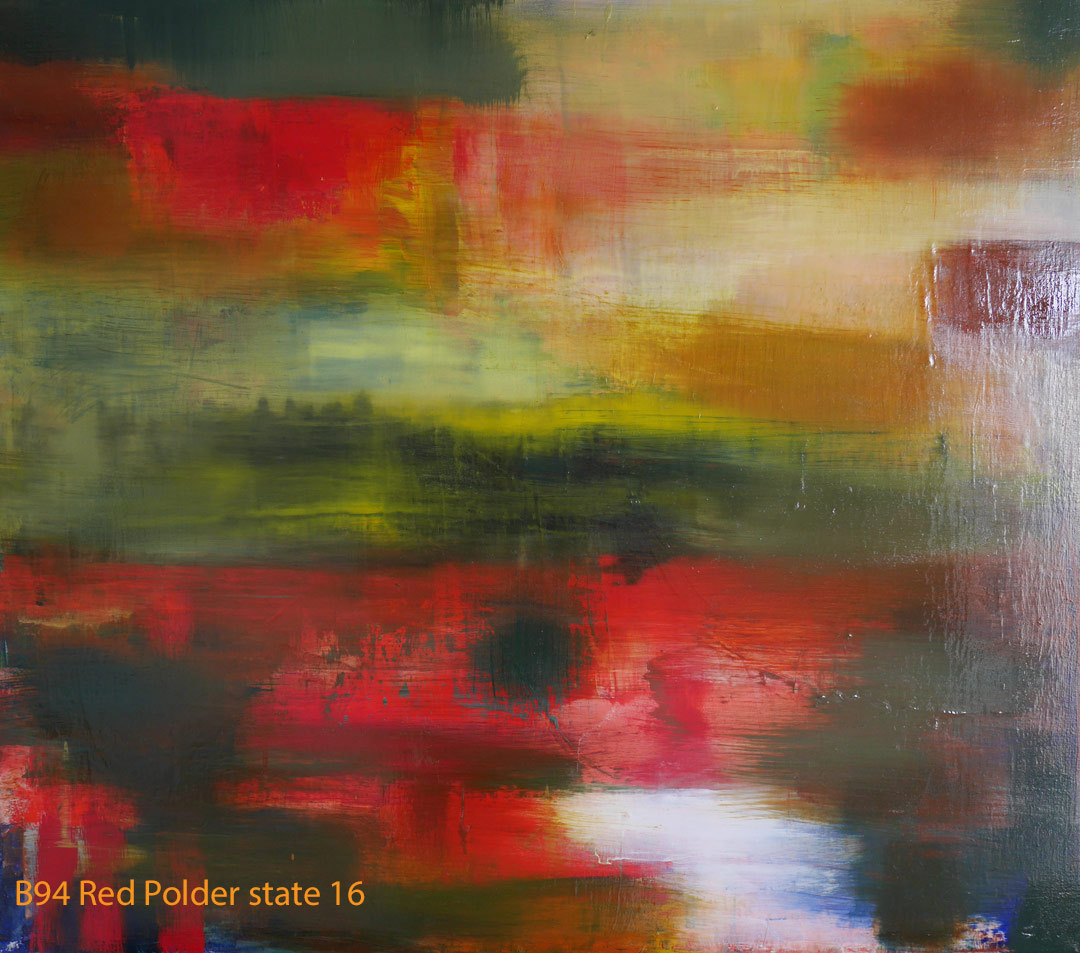 State 17 suppresses some of the detail and edges from state 16 and then the final values, colours, their intensities and texture are worked up. State 18 is clearly recognisable into state 21. A vignette, an arch of translucent desaturated red dripping down into the composition, has been introduced in state 19 to emphasise the blue area right of centre. That blue has subsequently been contextualised across the central band into turquoise and green. 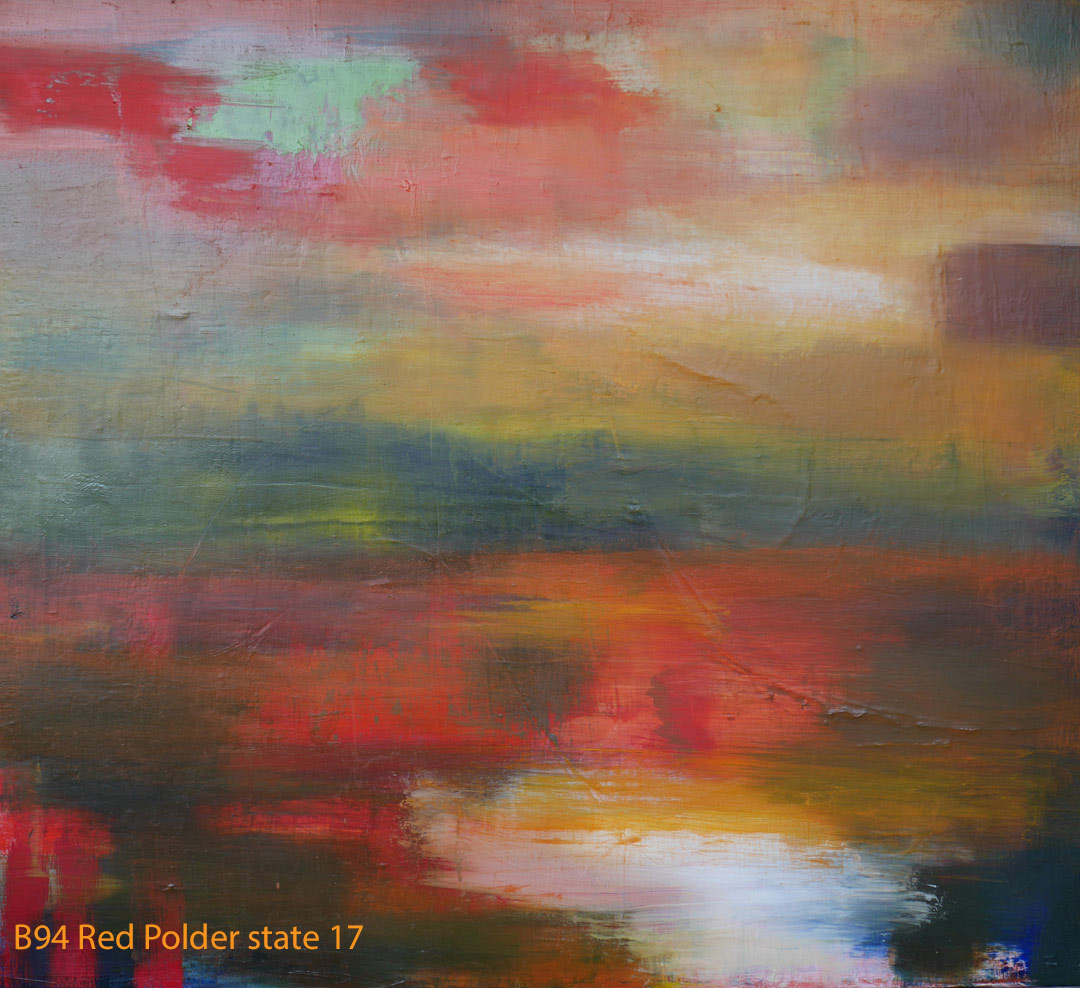 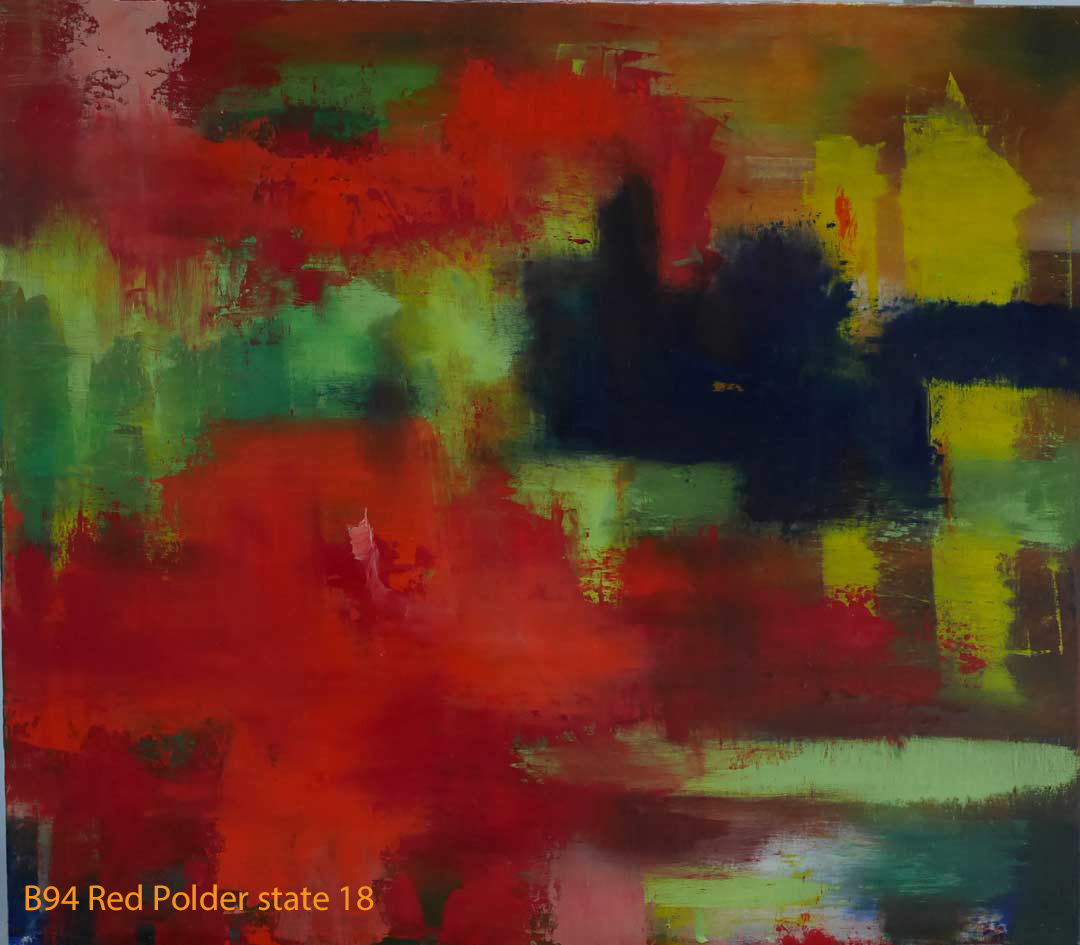 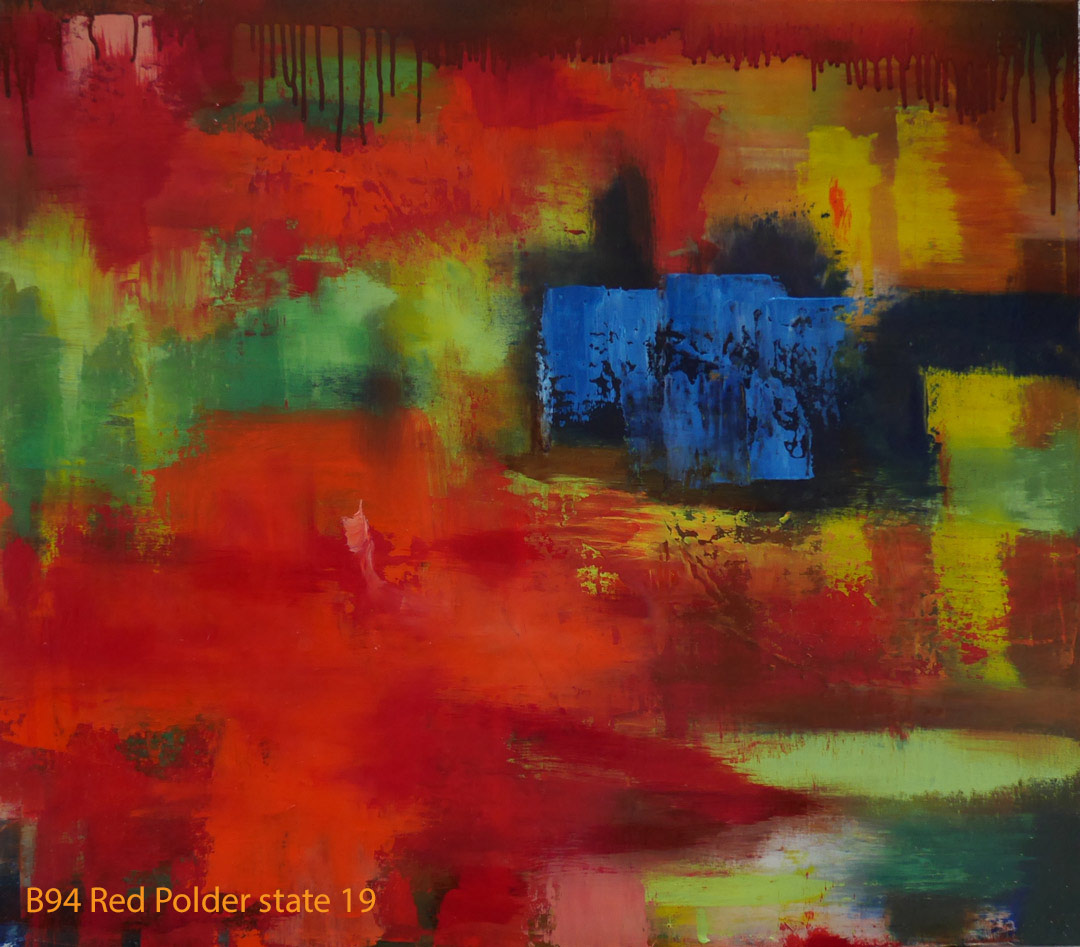 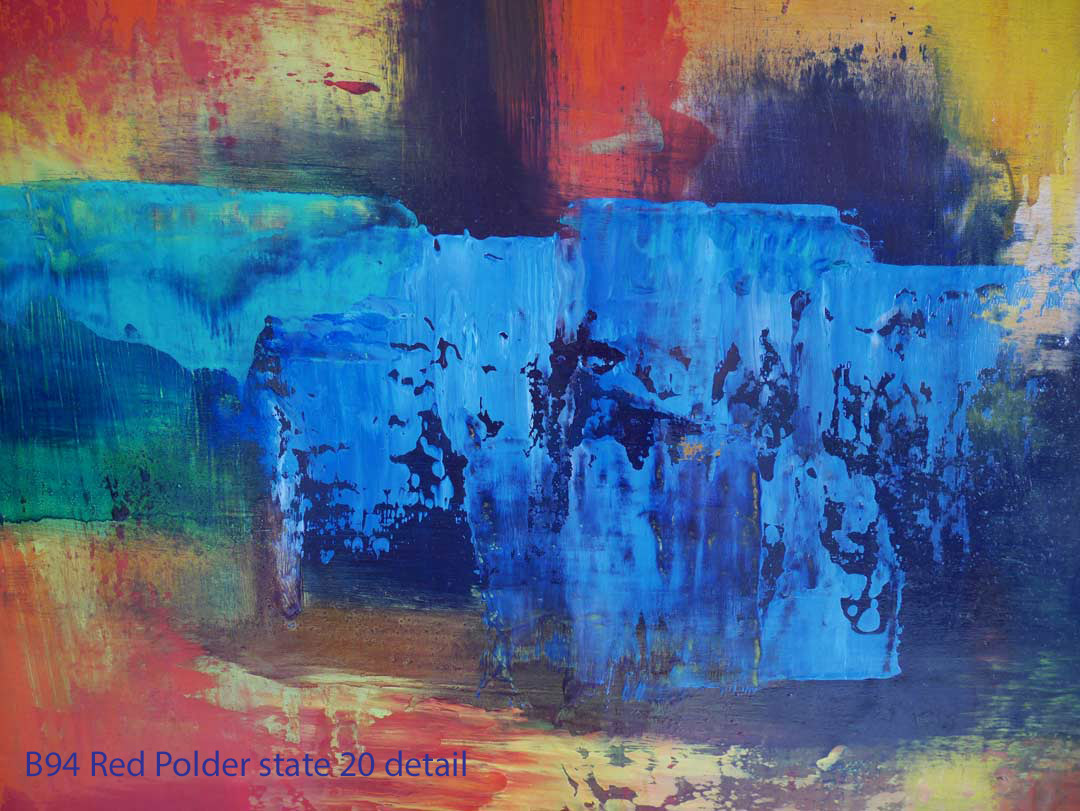 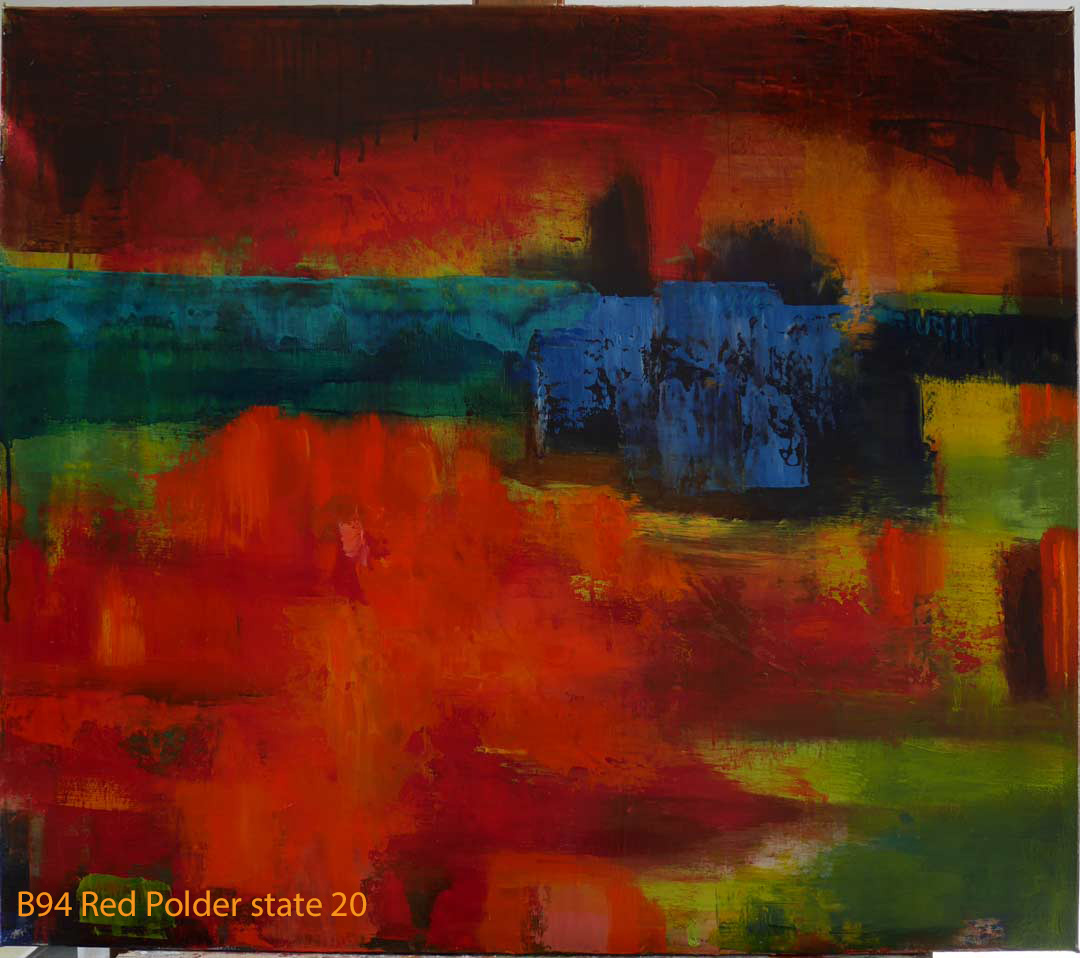 States 21A and B: Final Design and Detailing

The final design is effectively reached in state 20. In states 21A and 21B, the scale of working is reduced and small adjustments are made. Some colour fields were adjusted in hue or intensity. 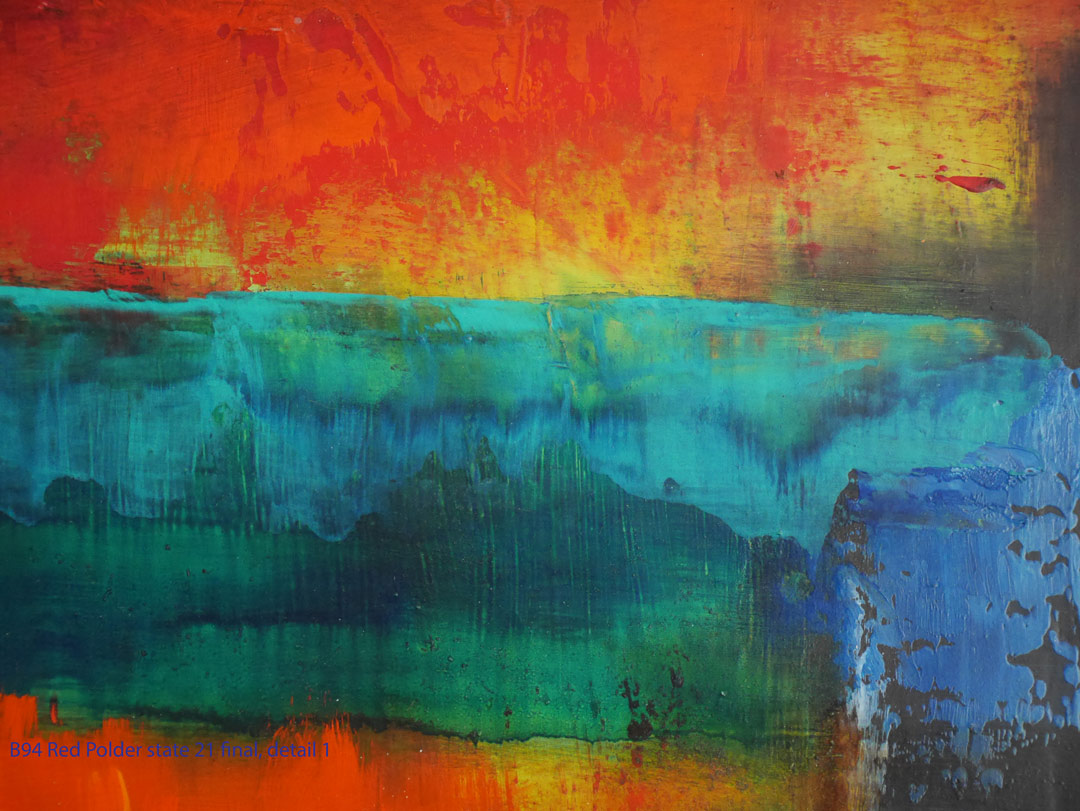 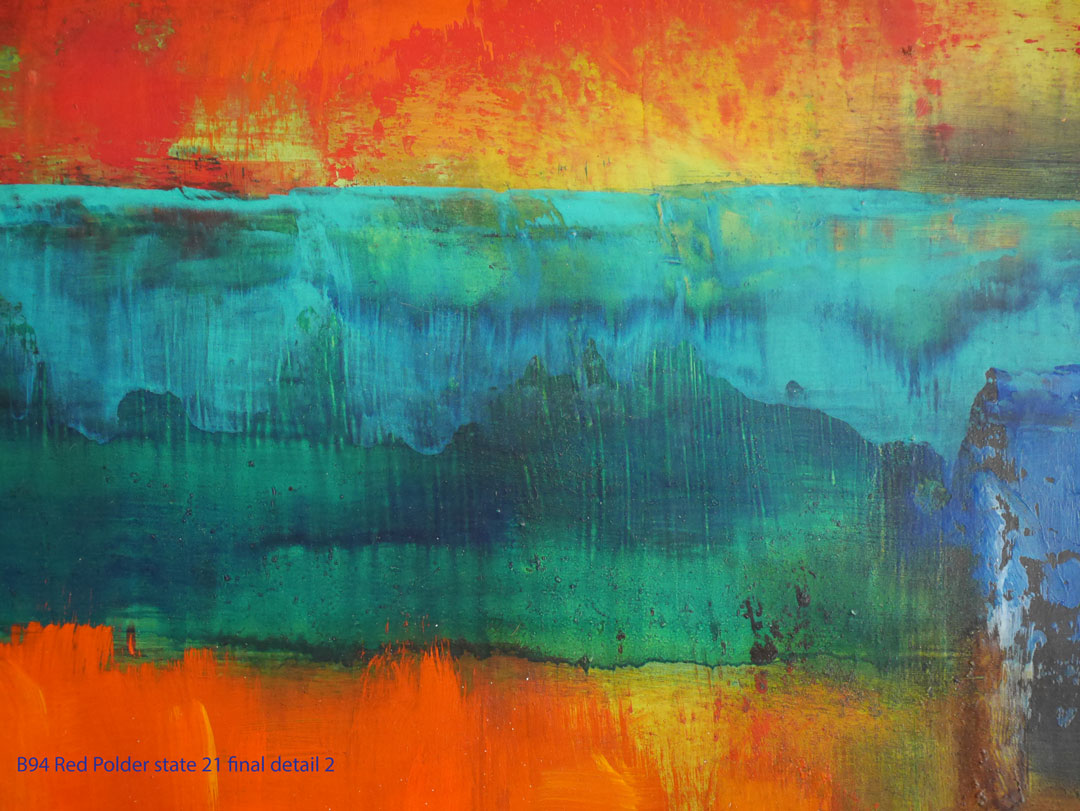 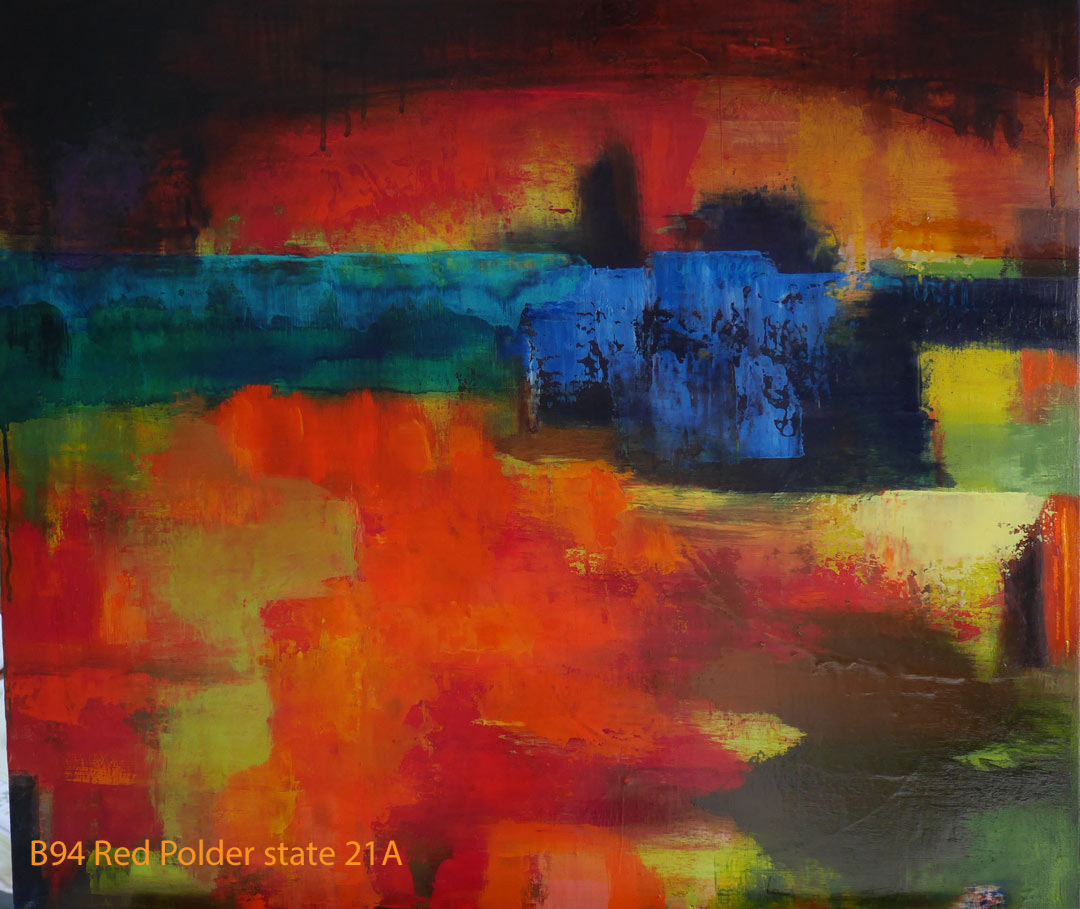 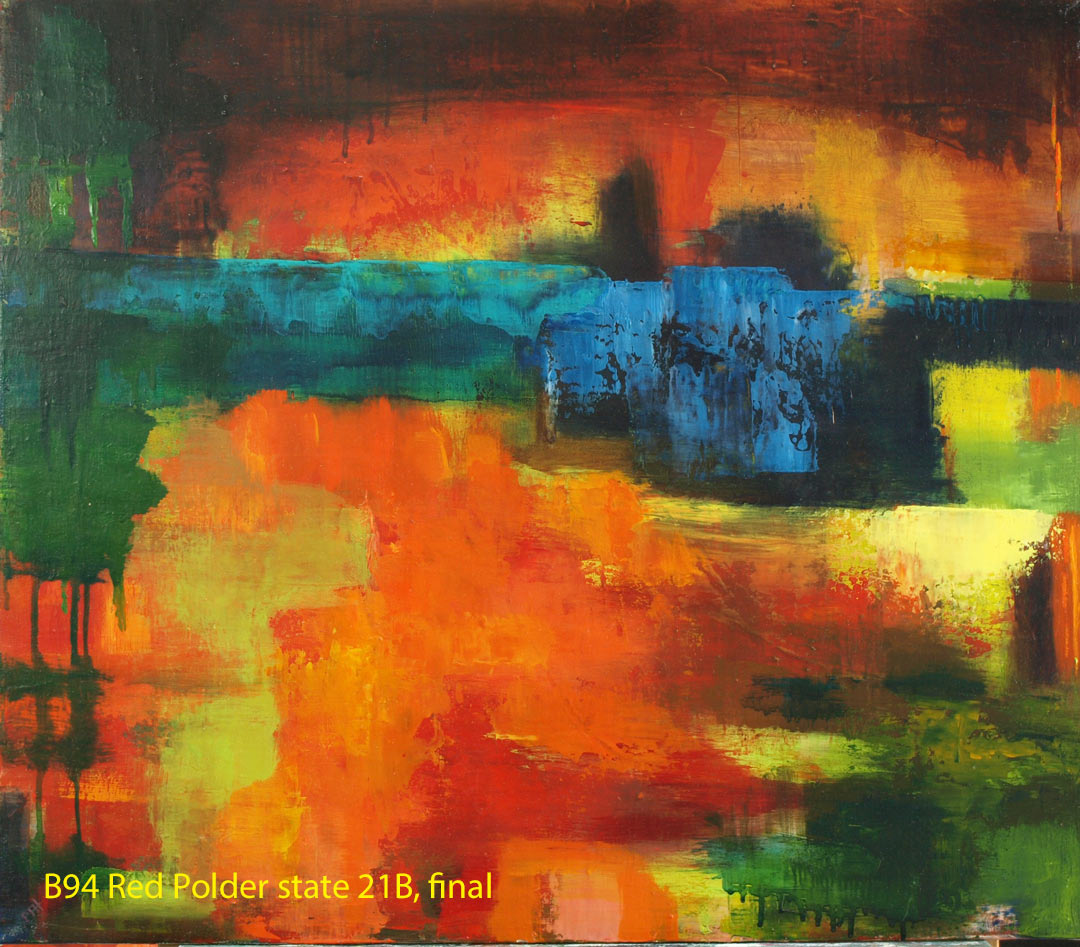 ‘Red Polder’ Not for Sale

‘Red Polder’ forms a pivotal point in my artistic development and hence it is retained in my personal collection and is not for sale.