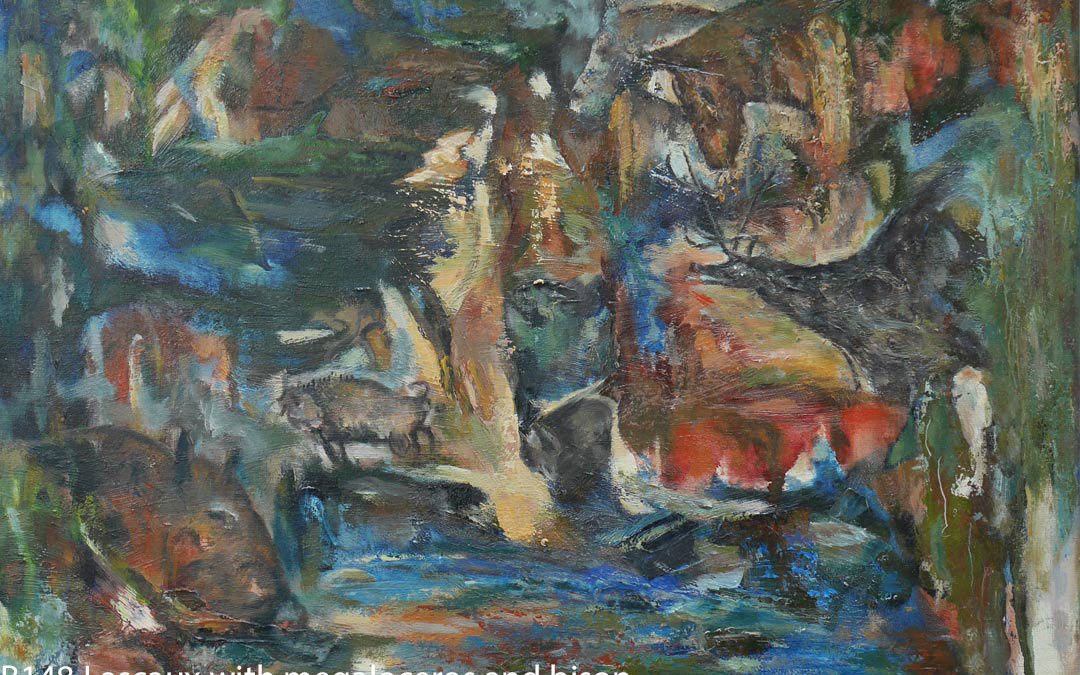 The theme of these paintings created in 2018 is air, wind, water, earth, rock, foliage and their inter-relationship, particularly the carbon cycle – the basis for life in all its forms on Earth. The geology is what is there, the geotchnics are what one can do with them, such as in construction.

Working as a civil engineering consultant for some 50 years I was acutely conscious of the impact of weather on the exposed surfaces of projects and the quality of the underlying ground, soil or rock, on the integrity of the capital works. This interest suggested the theme for a number of paintings.

During my research on contemporary art and artists I was attracted to the portfolio of the late Per Kirkeby. Kirkeby was an artist, sculptor and poet – a polymath and a specialist in earth sciences; his extensive knowledge in the field of geology was strongly evident in his sculptural and painted art.

Illustrations of cave paintings at Lascaux prompted me to create the initial painting of the set which I loosely group together as Geological Paintings.

Lascaux is the site of a complex of caves near the village of Montignac, in the department of Dordogne in southwestern France. Over 600 parietal (the archaeological term for art work on cave walls or large blocks of stone) wall paintings cover the interior walls and ceilings of the cave. The paintings represent primarily large animals, typical local and contemporary fauna that correspond with the fossil record of the Upper palolithic time. The drawings are the combined effort of many generations, and with continued debate, the age of the paintings is estimated at around 17,000 years (early Magdalenian).

The common features of my Geological Paintings are: 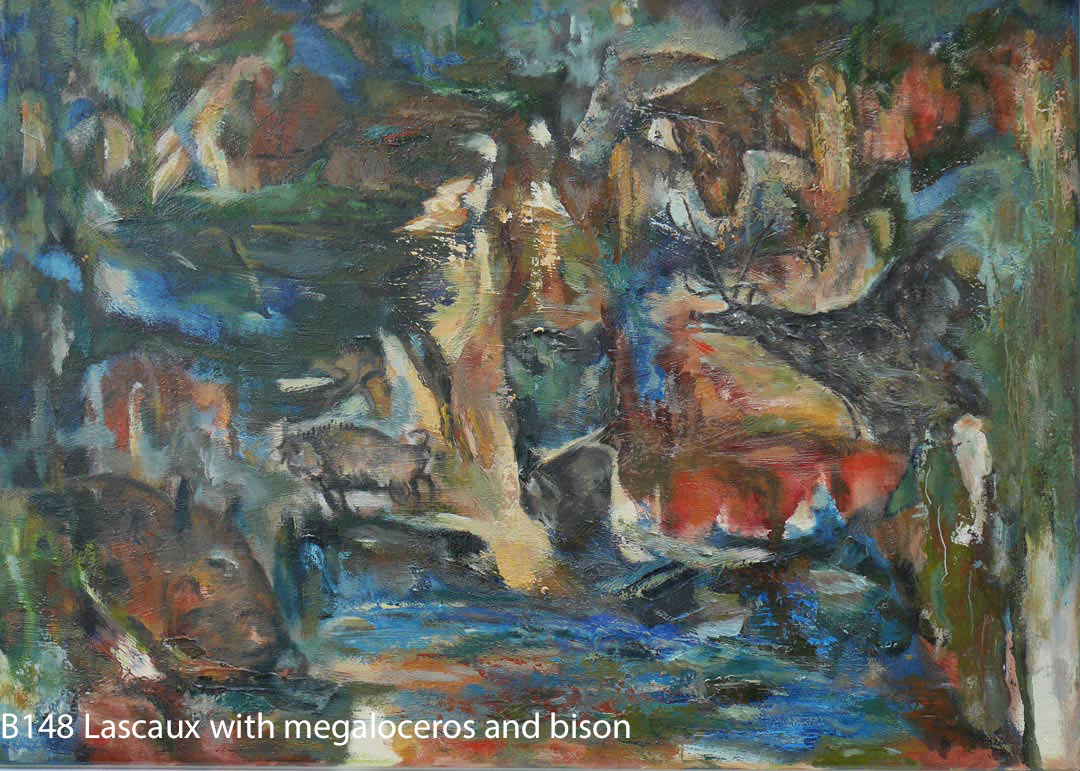 B148, ‘Lascaux with megaloceros and bison’

B148, ‘Lascaux with megaloceros and bison’ oil on canvas 50 x 70 cm,  was the first painting of the set. Leonardo da Vinci used to encourage his students to draw random, natural objects such as the cinders in a fire. Thinking of that I recalled earth and rock structures to create the setting of the caves upon which are superimposed images of a megaloceros and a bison which are featured at Lascaux.

While the work proceeded, other forms from nature seemed to impose themselves on the painting.  A large wild boar, two horses heads, a fish and several more became apparent. This, of course, is similar to our recognising images of various familiar objects in cloud formations – another natural, but random phenomenon.

I have now lost count of how many creatures may be discerned on the canvas and everyone who views the painting points out another animal form. When viewed in a value scale (black through greys to white) the image of a large pre-historic winged creature appears to dominate the canvas. 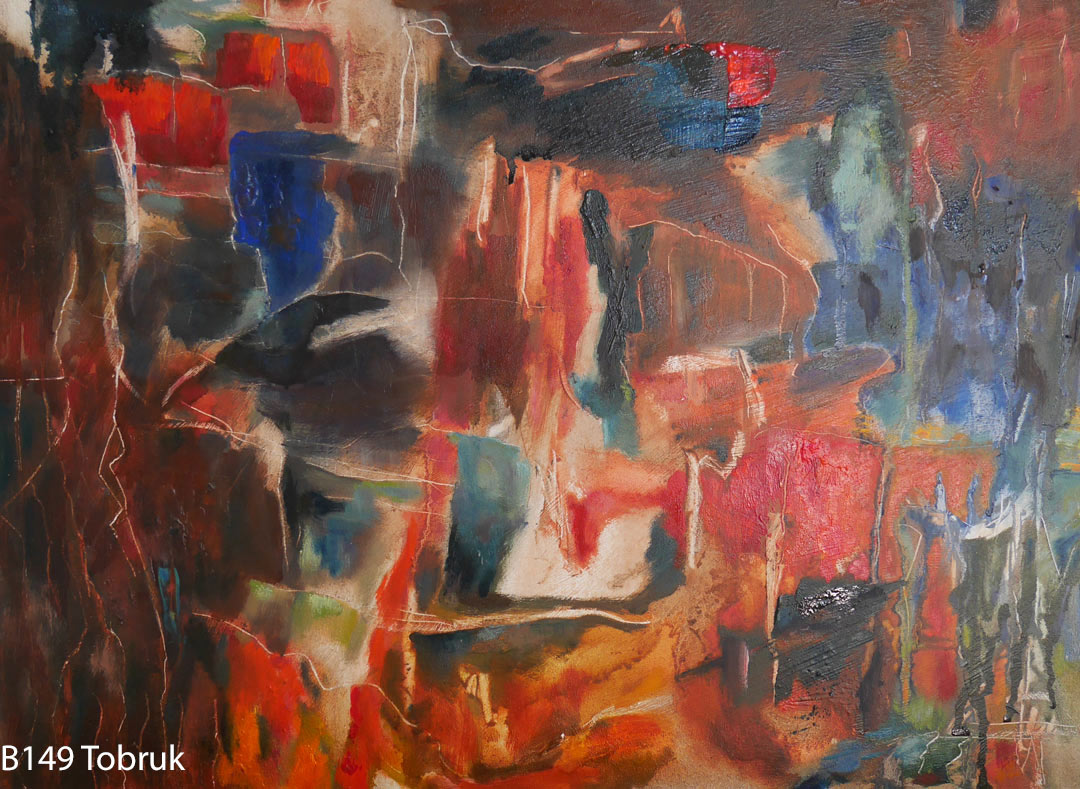 At only 30 x 40 cm this is a relatively small work given the demands of the subject. The board support was coated with five layers of gesso (glue, chalk and white pigment). When the oil paint was applied those layers could be scored through and the gesso exposed to represent the fissures in the rock formation – through which water can percolate and roots penetrate.

Having worked for two years in Libya and visited Tobruk in search of a source of road-building material it seemed an appropriate title for the painting. It will be noted that the paint layering is relatively thin and dominated by the red and red-orange earth pigments. 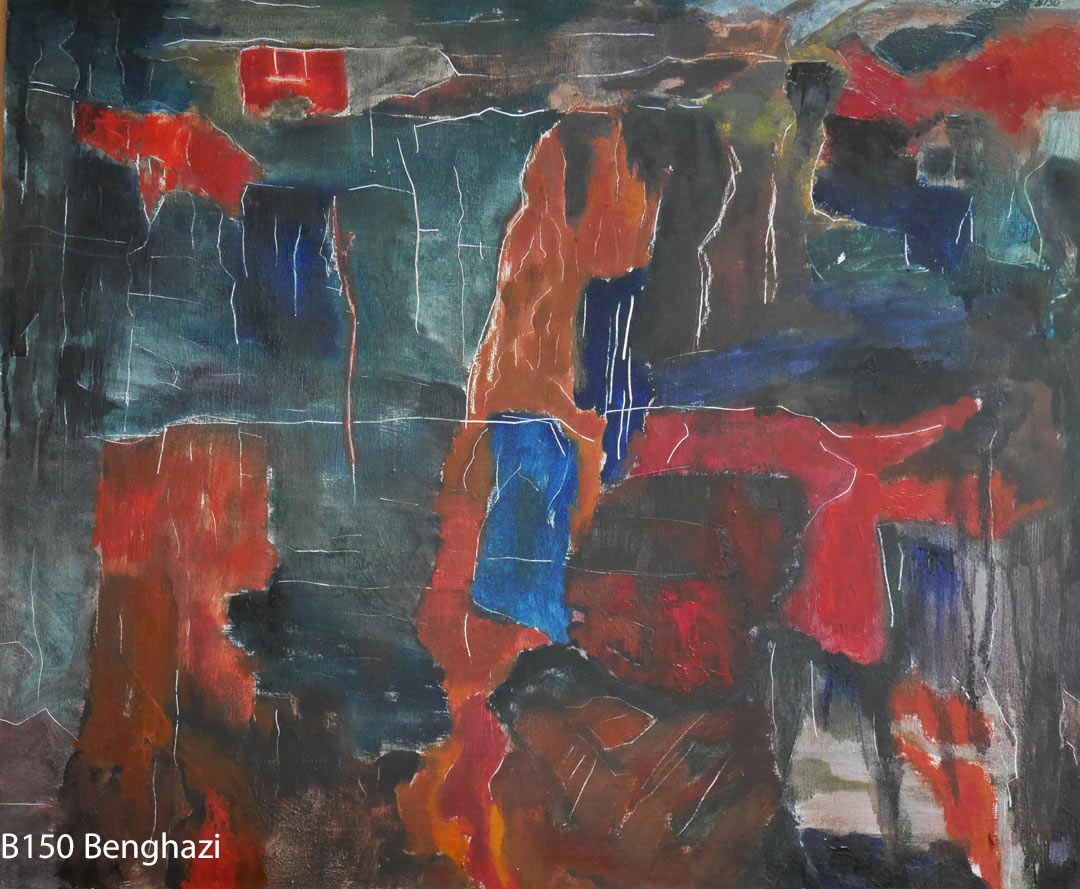 B150, ‘Benghazi’ oil on board 51 x 61 cm. This larger work builds upon ‘Tobruk’ and maintains a similar palette and its characteristic scoring through to the gesso. In this case one gesso application was stained red and in places that has been exposed by the scoring and gauging.

Small passages of Smalt, an early blue pigment like a ground glass, and the semi-precious pigment Lapis-Lazuli, have been used.

Benghazi was our home for two years during the stable rule of Ghadaffi, before American interference reduced the country to rubble. 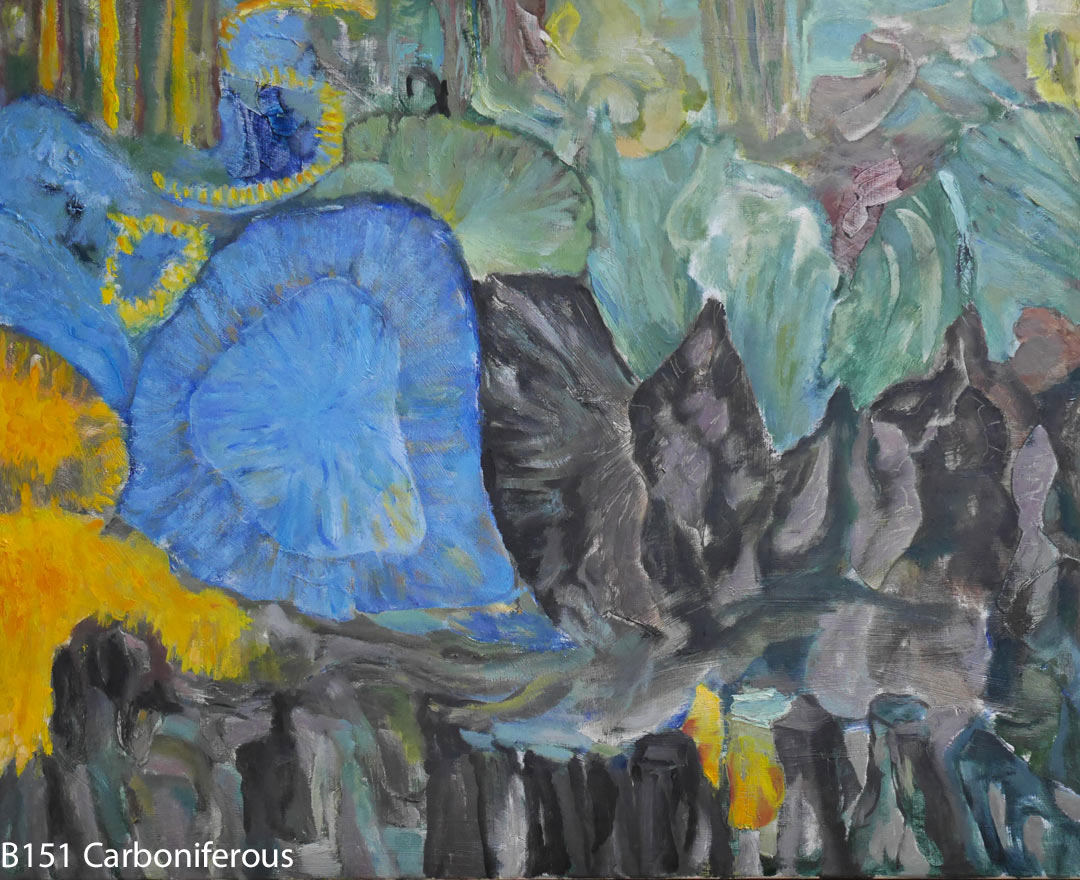 B151, ‘Carboniferous’ is painted on a 61 x 76 cm panel. The work represents the formation of peat, coal, oil gas and coal from weathered and decayed vegetation.

The “black” is Cassel Earth, the green is a Verditer, both very much in keeping with the palette used earlier in the set. 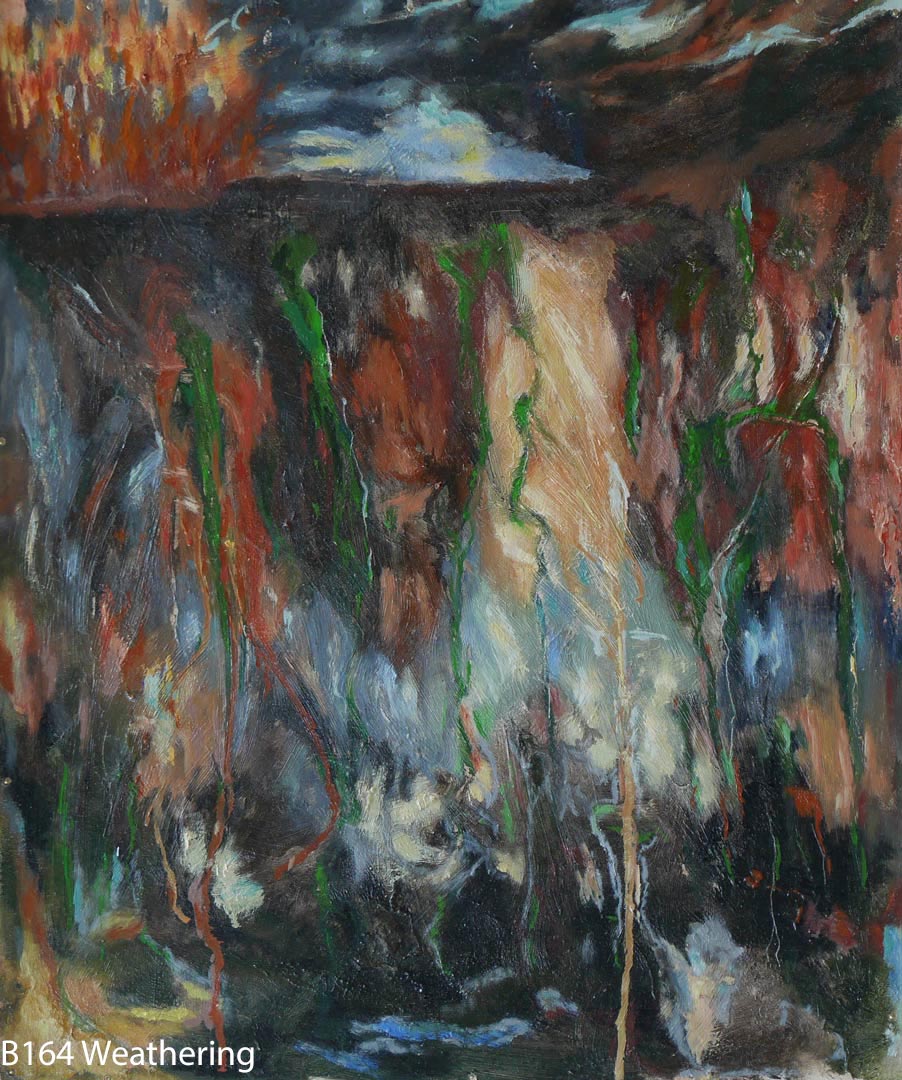 B164, ‘Weathering’ oil on board 61 x 51 cm, derives more from B148 ‘Lascaux with megaloceros and bison’ than from its immediate predecessors. The sky and trees may be discerned over the section of the soils and rocks and the weathering fissures through them. A heavily textured gesso ground assists with creating textural range which counters the relatively narrow range of values (lights to darks) which are necessary to create the atmosphere of the painting. 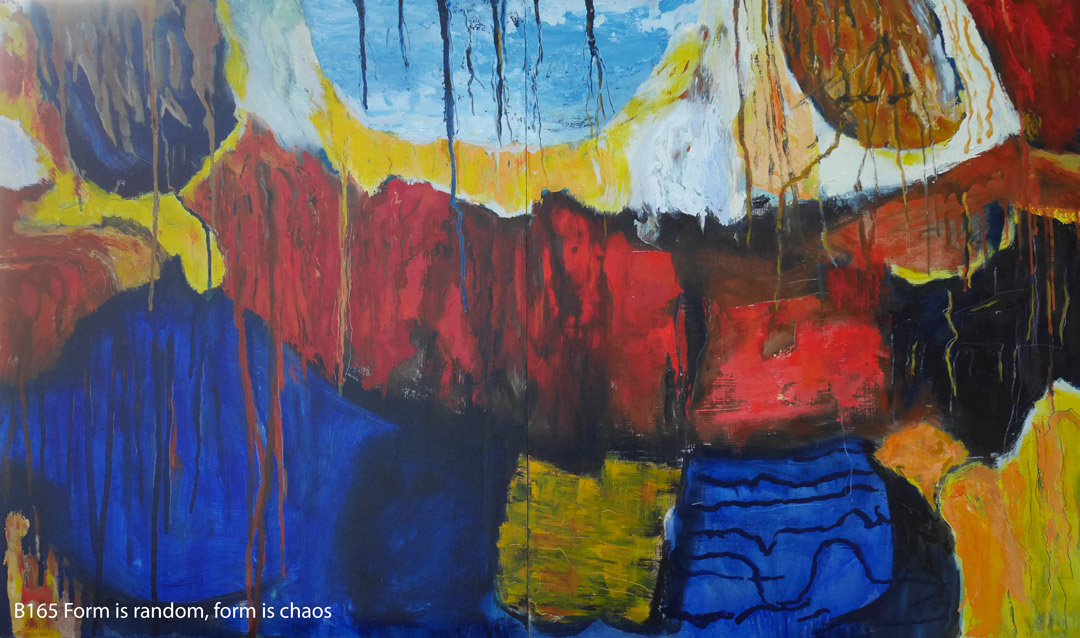 B165, ‘Form is random, form is chaos’ oil on two boards totalling 61 x 102 cm. The title is derived from a poem by Per Kirkeby, the Danish artist, sculptor and poet, who died just before I created this homage to him.

B165 has a more intense set of colours, this time Ultramarine Blue in both its deep and light forms, is introduced, and a large field of genuine Vermillion. The painting also adopts a wider value range than the predecessors in the set.

B165 was one of my submissions to the RA for the 2019 Summer Exhibition but it was not short-listed. It was painted as a diptych, that is both as stand-alone, linked paintings but they now sit in a common frame.

None of these paintings is for sale. They form a pivotal part of my private archive.